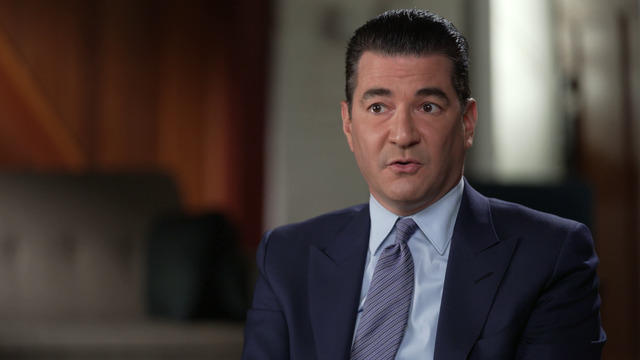 As officials seek to understand how the coronavirus pandemic emerged, one expert says that without more information from China, the world may never have an answer.

“Either we find the intermediate host — the animal that spread COVID — or there’s a whistleblower inside China. Or someone close to this, who knows that this came out of a lab, comes forward, defects, goes overseas, or we intercept some communication that we shouldn’t have had access to. Absent something like that, we’re not going to be able to answer this question,” said Scott Gottlieb, who served as Food and Drug Administration Commissioner in the Trump administration.

“This is going to be a battle of competing narratives,” Gottlieb told “Face the Nation” moderator Margaret Brennan in an exclusive interview Sunday about his upcoming book: “Uncontrolled Spread: Why COVID-19 Crushed Us and How We Can Defeat the Next Pandemic”.

In May, President Biden ordered U.S. intelligence agencies to conduct a 90-day investigation into the origins of the virus after the agencies “coalesced around two likely scenarios” but had not reached a conclusion.

Intelligence officials have said that since 2020, agencies were weighing the possibility that the virus emerged naturally, through human contact with an infected animal and was the result of a lab accident. They ruled out early on that the virus had been man-made.

The latest review was largely inconclusive. The intelligence community “remains divided on the most likely origin of COVID-19. All agencies assess that two hypotheses are plausible: natural exposure to an infected animal and a laboratory-associated incident,” the brief summary states.

In a statement, President Biden said the U.S. would continue working to understand the origins of the virus, and he called on China to be more transparent about what led to its emergence there in late 2019 before it spread rapidly across the globe.

“Critical information about the origins of this pandemic exists in the People’s Republic of China, yet from the beginning, government officials in China have worked to prevent international investigators and members of the global public health community from accessing it,” Biden said.

Gottlieb says that the search for critical information was essentially quashed by the World Health Organization’s unwillingness to confront China, instead “extolling China’s behavior and how forthcoming China was.”

“I think the WHO really did believe China was behaving in sort of an appropriate way and was providing cover for them as they were getting criticized by other parts of the world. Clearly, they weren’t, and I think that that was knowable at the time [when] China didn’t share the source strains,” Gottlieb said.

Those virus source strains, Gottlieb explains, are necessary to develop vaccines and diagnostics.

“The head of the WHO didn’t want to push China on sharing the source strains publicly because he said, well, they have no commitment to do it, and he’s right,” Gottlieb said, pointing out that International Health Regulations don’t explicitly require countries to share virus samples, but “there were requirements that you had to share samples of novel, emerging, best respiratory pathogens and other settings.”

“So, clearly, the spirit of the International Health Regulations was that this should be shared. But because it wasn’t the letter of the law, the WHO didn’t want to push China publicly to do it, even though that would have been very helpful for other nations,” he said.

Former President Trump announced the U.S. would withdraw from the WHO in May 2020, claiming that it caved to pressure from China “to mislead the world when the virus was first discovered by Chinese authorities” and that it’s under the “total control” of China. President Biden vowed to rejoin the organization on his first day in office.

While Gottlieb didn’t agree with the decision to withdraw from the international body, he thinks the Biden administration “lost an opportunity to compel different behavior out of the WHO by simply rejoining” the organization.

“We should have used the reentry to extract some kind of agreement about the show, engaging in some reform process and as best I know, as best we all know based on what’s public, that wasn’t done,” he argues. “The leverage was given up.”

A WHO-led team that spent four weeks in and around Wuhan earlier this year concluded in its final report, written jointly with Chinese scientists, that it was “extremely unlikely” that COVID-19 originated as the result of a laboratory accident. But one of the team’s investigator’s said the team was denied access to raw patient data from the early phase of the outbreak in Wuhan.

Gottlieb says the circumstances and operating procedures around the Wuhan facility created a lot of risk. “That doesn’t mean it came out of the lab, but it certainly makes that a suspect location.”

“You had novel coronaviruses being brought to those labs, particularly the Wuhan Institute of Virology. We know that they were doing that research in what’s called BSL-2 labs, lower security labs where tight precautions aren’t taken,” Gottlieb said, adding that “the lab was conducting high end research with the Chinese military.

Gottlieb says determining whether the virus originated in a lab is important for how the U.S. tries to govern research internationally. Citing concerns raised about the conditions in the Wuhan Institute of Virology by French scientists in 2017 — who were ultimately kicked out — Gottlieb suggests the need for an “International Atomic Energy Agency for BSL-4 labs” around the research being conducted.

Part of the need for international monitoring of high end research is the breakdown of global order of cooperation. Gottlieb says our reliance on other nations to be forthcoming about virus outbreaks has continuously failed, and urges the need to rely more on intelligence agencies to spot future outbreaks.

“In the past, there was always an assumption that the public health mission was the CDC’s mission,” Gottlieb said. “There was data very clearly available in China, in Wuhan, that if we were looking for it, we could have detected this much sooner. We could have answered some key questions. We could have seen the asymptomatic spread, we could have seen the human-to-human transmission. There was sequence data that was being- flying around by mid-December inside China, and probably earlier than that, being sent to commercial labs.”

Those signals, he argues, could only be intercepted by our clandestine services.

President Biden himself, in his first visit to the Office of the Director of National Intelligence in July, voiced the need for the intelligence community to be able to track pathogens. “You’re going to have to increase your ranks with people with significant scientific capacity relative to pathogens,” he said at the time.