Gov. Abbott says your power won’t be shut off for non-payment 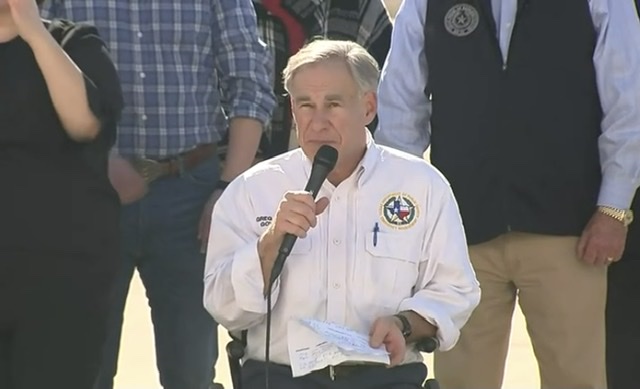 SAN ANTONIO (KTSA News) – Your power won’t be disconnected for non-payment. The Public Utility Commission has issued a moratorium on customer disconnections for non-payment and will temporarily restrict providers from issuing invoices.

Gov. Greg Abbott made the announcement Sunday at Port San Antonio as members of the Texas National Guard were unloading  water and other resources from an Air Force cargo plane. Those supplies will be distributed across the state, including here in San Antonio.

“We are making great progress in our recovery efforts from this winter storm, but many Texans are still without water, food, and other supplies — which is why the state is stepping up to make sure Texans have the resources they need to provide for their families,” said Abbott. “I thank our local, state, and federal partners for working together to address the needs of Texans and expedite our recovery process. I also want to thank our utility workers for providing crucial services to Texans who have experienced power outages and burst pipes.”

As of Sunday afternoon, about  30,000 Texans were without power. Abbott said those outages were caused by equipment failure, such as downed power lines. He was expecting those issued to be resolved by Sunday night or Monday.

The state has deployed trucks and aircraft to deliver water to communities, including 162 truck delivers that have delivered a total of 2 million bottles of water and 1.4 million bottles of water that have been delivered by plane and helicopter. Meals Ready to Eat, blankets, and generators have been provided to communities in need. In addition, the Governor has waived regulations to allow the use of unlicensed kitchens to prepare meals to donate to Texans so long as they abide by guidance issued by the Texas Department of State Health Services.

Abbott mentioned that he’s working with members of the legislature to address skyrocketing energy bills that resulted from a temporary spike in the energy market. He said that they are working quickly to calculate the total cost of these bills and find ways that the state can help reduce the burden. .