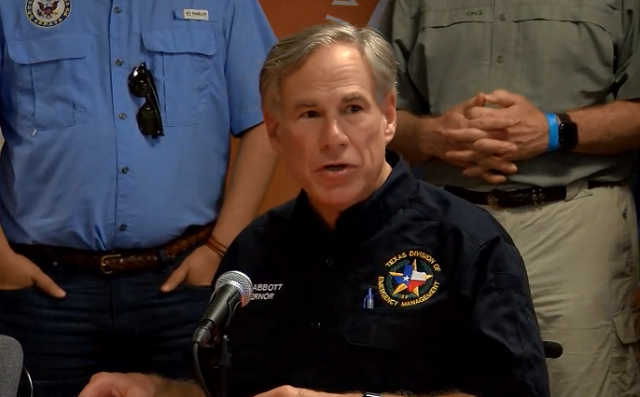 SAN ANTONIO (KTSA News) – Governor Greg Abbott wanted to get a first-hand look at the illegal immigration problem in South Texas, but he probably saw a lot more than he expected.

Abbott’s visit began Tuesday morning with a helicopter tour over the Rio Grande where he claims he saw more than 20 people crossing the border illegally.

“There were about 21 people in this particular group and it looked like it would be what would be categorized as family units.  There were groups of adults and some kids of different ages,” Abbott told reporters.

The governor said they were walking up a dirt road after getting off a raft that was pulled back to the Mexican side of the border.

Abbott claims Mexican drug cartels are flooding the border with women and children to distract the Border Patrol and make it easier to  smuggle drugs into the United States.   Speaking in Mission, Abbott blasted the Biden Administration’s policies for the “crisis at our southern border.”  He demanded more funding for ICE and more facilities to house people who are apprehended at the border.

“The Biden administration is joined together with progressives pretending that ICE is gonna go away or be eliminated,” said Abbott. “ICE is essential in this entire process and we expect the President and Biden administration to step up and fully fund and actually add additional funding.”

“Abbott shouted from a stage area on the border today as he demanded that all men and women in the U.S. Border Patrol be vaccinated this week.  But sadly, Abbott has not shown the same vigor in vaccinating Texans who live on the border, or even teachers or industry workers, and those who have been disproportionately affected by the pandemic,” Hinojosa said.

Teachers were recently added to the priority vaccination categories after the Texas Department of State Health Services received a directive from the U.S. Department of Health and Human services.