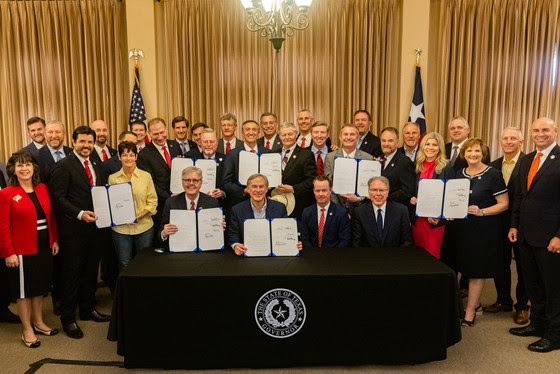 Abbott said the Alamo was selected because it was the place where Texans fought for freedom.

Abbott cited a reported rise in crime in border communities as an example for why this legislation is so important.

“Just look at ranchers who live in South Texas who are being invaded on a daily basis by people coming across the border,” Abbott said. “They need to have a gun to be able to defend themselves against cartels and hands and other very dangerous people. There is a need for people to have a weapon to defend themselves.”

Senate Bill 19 prohibits any governmental entity from contracting with any business that discriminates against firearm and ammunition businesses or organizations.

Senate Bill 550 removes the shoulder or belt holster requirements, allowing Texans to carry firearms in whatever kind of holster they choose.

House Bill 957 repeals the criminal offense of possessing, manufacturing, transporting, or repairing a firearm silencer. It also ensures that any firearm suppressor manufactured in Texas, and that remains in Texas, will not be subject to federal law or federal regulation.

House Bill 1500 prevents any government entity from prohibiting the sale or transportation of firearms or ammunition during a declared disaster or emergency.

House Bill 1927 authorizes constitutional carry in Texas, meaning law-abiding Texans can legally carry a handgun without a license to carry.

“This would be a day that Travis and Bowie and Crockett would be proud,” Patrick said. “…We’re a place where Texans will stand up and defend themselves and defend others and save lives.”

Abbott was asked about the last weekend’s mass shooting in Austin and where 13 were injured and one man killed.  He said he spoke with the family of Douglas J. Kantor, 25, who died from his injuries.

“The family members are heartbroken about what happened, but [they] were adamant about two things,” Abbott said. “One, do not let this crime committed by teenagers be the reason to eliminate gun rights in the United States of America. The second thing they told me … they were against policies that defund police in our cities.”

“Politicians from the federal level to the local level have threatened to take guns from law-abiding citizens — but we will not let that happen in Texas,” said Governor Abbott. “Texas will always be the leader in defending the Second Amendment, which is why we built a barrier around gun rights this session. These seven laws will protect the rights of law-abiding citizens and ensure that Texas remains a bastion of freedom. Thank you to the Texas Legislature for getting these bills to my desk.”

38 mins ago
Connect With Us Listen To Us On