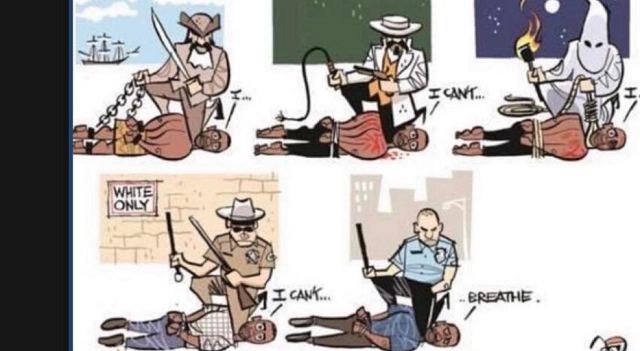 “It’s the opposite of what must be taught,” Abbott tweeted. “The teacher should be fired.”

He’s calling on the Texas Education Agency to investigate and take action.

The assignment features several cartoon pictures showing the progression from slave owners to Klansman to police officers, all with a knee on the neck of a black man with the words, “I can’t breathe.”  It’s a reference to the death of George Floyd who died after a Minneapolis police officer put a knee on his neck for more than 8 minutes.

Joe Gamaldi,  vice president of the National Fraternal Order of Police, posted a copy of the collage on social media and blasted the Wylie Independent School District.

“I cannot begin to tell you how abhorrent and disturbing this comparison is, but what is more disturbing is that no adult within your school thought better before sending this assignment to children,” said Gamaldi, who fired off a letter to the superintendent last week.

After a backlash on social media, the Wylie School District apologized to law enforcement and removed the social studies assignment which was given to 8th graders at Cooper Junior High.  The principal said it was part of a lesson about the First Amendment.

The mother of an 8th grade student  who received the assignment told Fox 4 News  in the Dallas-Fort Worth area that the pictures represent a difficult conversation that must be had.

She added that it represents decades of oppression.

“This picture is depicting  years of oppression and it is showing why we protest,” Senters told Fox 4 News.

A substitute teacher who also is the parent of a child who received the assignment says the cartoon was taken out of context.

On Fox News 4, Tammy Perdomo read from the assignment, “In the midst of the protests following George Floyd’s death, some have criticized protesters for creating chaos, others say violence is instigated by outside extremist groups, and many see police initiating violence at the protests. What is cartoon number 1 saying about U.S. history and the death of George Floyd?”

She said the teachers aren’t expressing their opinions .

“They’re asking the kids to think critically.  That’s what we want our kids to do,” said Perdomo. “We want them to be critical thinkers.”