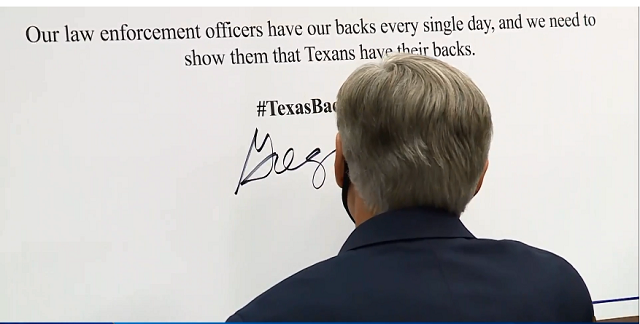 SAN ANTONIO (KTSA News) – Governor Greg Abbott has come up with a new proposal to stop cities from defunding their police departments.  He announced the recommended legislation Thursday afternoon  before signing a “Back the Blue” pledge in Austin with representatives of various law enforcement agencies and organizations.

“Cities that defund their police departments will forever lose their annexation powers, and any areas and any residents that have ever been annexed by that city in the past will have the power to vote to dis-annex them from the city,” said Abbott.

He’s urging the Texas Legislature to take up the measure when lawmakers reconvene in Austin early next year. That’s in addition to a previous proposal to freeze property tax revenues in cities that cut their police budgets.

“The last thing they should do is defund law enforcement, and yet, that is exactly what the city of Austin has done, and that’s what Dallas City Council voted to d in announcing its own defunding scheme last night,” Abbott said.

“Our law enforcement officers have our backs every single day,” said the governor. “We need to show them that Texans and their elected leaders have their backs too.”

Austin’s Mayor Adler has stated that he doesn’t consider cuts to the police department “defunding.”  The Austin City Council recently slashed $150 million from the police budget plans to shift much of the money to other departments and community programs, including mental health response, violence prevention, food access, substance abuse care and the Austin-Travis County EMS.

The Governor also called out the Dallas City Council for voting Wednesday night to cut its police department budget.

“Greg Abbott knows Texans are fed up with his mishandling of the coronavirus pandemic, so he tries a tired old trick to change the subject and manufacture fear,” Garcia said in a statement. “He’s desperate to change the narrative, so reporters stop asking him about his failure to protect Texans from COVID-19.