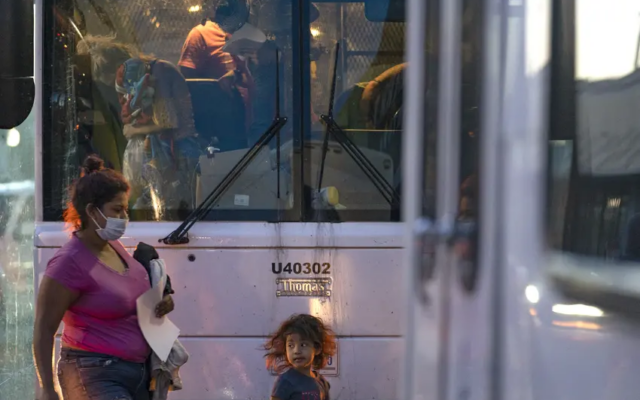 Asylum-seekers got off a bus last August in front of the Catholic Charities Humanitarian Respite Center in McAllen. Credit: Sophie Park/The Texas Tribune

By James Barragán, The Texas Tribune

As federal officials brace for an increase of thousands more migrants at an already busy southern border, Gov. Greg Abbott said Wednesday that Texas will provide charter buses to border communities so migrants can be sent to Washington, D.C., where the Biden administration can better deal with them.

Texas Division of Emergency Management Chief Nim Kidd, who will oversee the busing program, said the state will have over 900 buses for this operation and Abbott said the first drop-off would be at the U.S. Capitol.

Abbott’s announcement is in response to the administration’s decision last month to roll back a pandemic-era emergency health order known as Title 42 that allowed immigration authorities to turn away migrants at the border, even those seeking asylum. That order, which was put in place during former President Donald Trump’s administration, has allowed immigration authorities to manage the sometimes overwhelming number of migrants trying to enter the country.

Without it, federal officials say, they expect to draw thousands more migrants to the southwestern border every day, in addition to the already large numbers of people trying to enter from Latin America and other places across the globe.

Abbott also said Wednesday the Department of Public Safety will immediately begin enhanced safety inspections of commercial vehicles coming through the Mexico border into Texas because human smugglers are known to use commercial trucks to transport people into the country. Abbott acknowledged that the move will “dramatically slow” traffic at the Texas border. Mexico is one of state’s largest trading partner and does hundreds of billions of dollars in trade with Texas every year.

Abbott also said the state will create boat blockades on the Rio Grande to deter migrants and install concertina wire, a type of barbed or razor wire, in low-river crossings on the river that are high-traffic areas.

In the midst of a reelection push, Abbott, a Republican, has made border security a top priority. Last March, he announced he was sending National Guard troops and Department of Public Safety troopers to the border to curb illegal immigration into the state in an effort dubbed Operation Lone Star.

This story is developing and will be updated.

We can’t wait to welcome you in person and online to the 2022 Texas Tribune Festival, our multiday celebration of big, bold ideas about politics, public policy and the day’s news — all taking place just steps away from the Texas Capitol from Sept. 22-24. When tickets go on sale in May, Tribune members will save big. Donate to join or renew today.

This article originally appeared in The Texas Tribune at https://www.texastribune.org/2022/04/06/greg-abbott-texas-border-title-42/.