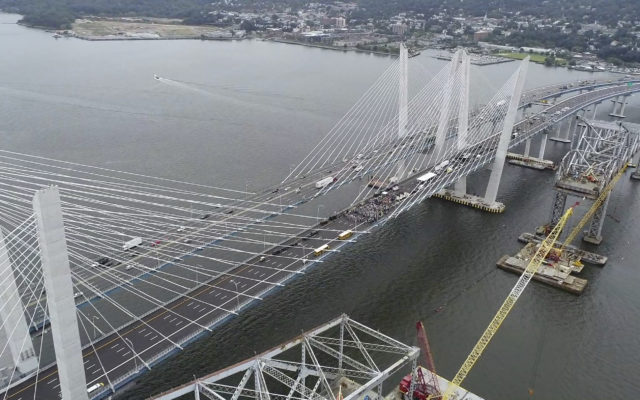 In this image made from video provided by the New York Governor's Office, state officials and workers gather to celebrate the official opening of the second span, right, of the Mario M. Cuomo Bridge, Friday, Sept. 7, 2018, in Nyack, N.Y. The new bridge's first span opened in 2017, when the structure was named to honor New York state's governor who served from 1983 to 1994. (Kevin Coughlin/New York Governor's Office via AP)

By JENNIFER PELTZ Associated Press
NEW YORK (AP) — What’s in a name? Or in the case of New York’s new Gov. Mario M. Cuomo Bridge, what’s not in it?
Roughly year-old signs for the long suburban bridge are being patched over because they don’t bear the former governor’s middle initial, the state Department of Transportation said Thursday.
Department spokesman Joseph Morrissey said it’s being done “to ensure every sign reflects the official name of the new bridge” and make sure signs are uniform.
It’s not immediately clear how many signs are involved or how much the fixes will cost. The Journal News first reported on them, pegging the number at dozens of signs.
The DOT is patching over the signs on its roadways, while the state Thruway Authority is patching some of its relatively few signs and replacing others, Thruway spokeswoman Jennifer Givner told the Journal News. The agency is producing the signs in-house, she said.
The nearly $4 billion bridge over the Hudson River opened last year. Connecting Westchester and Rockland counties north of New York City, the span replaced the former Tappan Zee Bridge — or, officially, the Gov. Malcolm Wilson Tappan Zee Bridge.
Lawmakers and current Gov. Andrew Cuomo agreed to name the new span after his late father, who held the state’s highest office from 1983 through 1994. Mario Cuomo, who died in 2015, was Democrat, as is his son.
In a twist, Mario Cuomo had formally renamed the bridge to honor Wilson, a Republican. It had been the Tappan Zee Bridge since 1956, and many residents of the region kept calling it just that. (And many still do.)
The Cuomo change irked Wilson’s daughter, and it spurred an online petition urging that the name revert to Tappan Zee, which harkened to the area’s Native American history and Dutch colonists. Andrew Cuomo called the renaming-reversal campaign “vindictive” and personally hurtful.
The missing “M.” fixes come as a state agency is also correcting a misspelling of the name of the Verrazzano-Narrows Bridge in New York City. For over 50 years, one “Z” was missing.
In that dropped-letter matter, the state Metropolitan Transportation Authority argued for years that it could cost millions of dollars to correct road signs, brochures and maps referring to the nation’s longest suspension bridge.
Lawmakers and Cuomo agreed last year to fix the signs and materials only as they wore out or were reprinted.
The span honors Italian explorer Giovanni da Verrazzano, who sailed into what is now New York harbor in 1524.