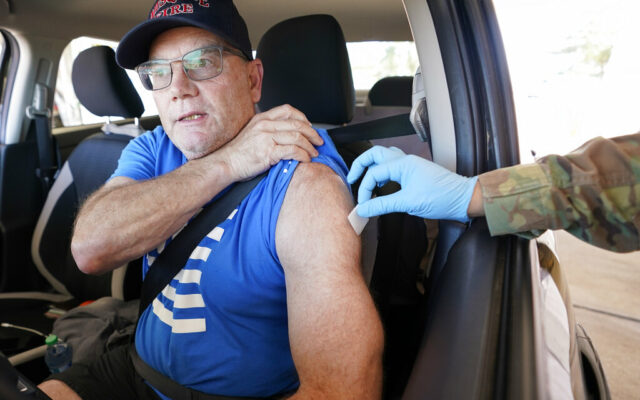 As the U.S. enters year three of a global pandemic, many businesses have sought to contain its damage by imposing rules to keep their companies running, requiring measures like masking and vaccination for employees and customers. The response in Republican-led states to the rules set by these companies has varied.

Some GOP governors would ban businesses from forcing employees and customers to receive vaccinations, while others refuse to interfere with those decisions. And that divide — a split over whether and when the government should involve itself in the private sector — highlights what could be a substantial difference in governing philosophies ahead of the 2024 presidential election.

Two of the nation’s most prominent Republican governors, Greg Abbott of Texas and Ron DeSantis of Florida, would prohibit private companies from imposing blanket vaccine requirements. They’re joined by Alabama and Montana, which have also sought to ban such rules. However, Governor Kristi Noem of South Dakota says she doesn’t like vaccine requirements, but won’t expand the role and scope of government by intervening in private business affairs. All three governors, who have been allies of former President Trump, are often mentioned as potential 2024 candidates.

DeSantis and Abbott have arrived at a different conclusion about the politics of their party than Noem, said Mark Brewer, an expert in political behavior who is also the political science department chair at the University of Maine.

“DeSantis and Abbott are betting that what’s going to win them the most popularity among voters is going to be coming out strongly opposed to private business or private sector mandates of any kind,” Brewer said. “They’re willing to say, ‘Oh, I’ll use the power of the state to prevent that from happening.’ Whereas Kristi Noem is maybe saying, ‘Well I want to make it clear that I’m opposed to any kind of mandate, but I also want to make it clear to the base that I’m also in the more mainstream Republican tradition of being loathe to use the power of the state to interfere with what the private sector does.’ And I don’t know which of those is going to be more appealing moving forward, and I don’t think they do either.”

In November, DeSantis signed a state legislature-passed bill prohibiting private sector vaccine requirements that fail to make exemptions for medical reasons, religious reasons, COVID-19 “immunity” or periodic testing. To stop companies from imposing vaccine requirements on employees as a condition for employment, DeSantis signed a law in November that would fine small businesses $10,000 per violation and larger companies $50,000 per violation. Over the summer, Norwegian Cruise Line sued Florida over an earlier state law prohibiting cruise ships from requiring passengers to show proof of COVID-19 vaccination; a federal judge sided with the cruise line.

“Nobody should lose their job due to heavy-handed COVID mandates, and we had a responsibility to protect the livelihood of the people of Florida,” DeSantis said in November, when he signed the bill banning blanket vaccine requirements.

In October, Abbott issued an executive order banning any Texas entity, including private companies, from compelling employees or customers to prove they had been vaccinated against a COVID-19. Under the order, employees may object to vaccination “for any reason of personal conscience, based on a religious belief, or for medical reasons, including prior recovery from COVID-19.” At the time, Abbott tweeted the vaccine is “safe” and “effective,” but “should always remain voluntary & never forced.”

For Republicans siding with Abbott and DeSantis in their crusade against business’ vaccine requirements, it’s a matter of personal freedom and privacy. They suggest the right to keep health information private is of paramount importance, and government can intervene to prevent business from making health care decisions for employees and customers.

Noem, resisting pressure in her state to ban private-sector vaccine requirements, said last summer, “It is not conservative to tell businesses what to do and how to treat their employees.” At the same time, Noem has been one of the biggest opponents of the Biden administration rule requiring vaccinations or testing in businesses with 100 or more employees, a consistent position across the Republican Party.

Deregulation and hindering the government from intervening in the economic affairs of the private sector have been cornerstones of the Republican Party, at least since Ronald Reagan was president, expert political observers note.

“Obviously, conservatives have always been, or at least ideally have been, pro-free market, pro-business, pro-enterprise, and they have been very critical of government regulation,” said David Boaz, executive vice president at the libertarian Cato Institute think tank.

Much of this divide has only become evident because of the unforeseen circumstance of a yearslong global pandemic. The efforts of conservative governors to impose laws and executive orders restricting business vaccine requirements is “flying in the face of traditional Republican arguments about the limited role of government and the benefits of diverse and plural private enterprise,” Boaz said. It’s a battle that’s also playing out in the fight over big tech, as some in the Republican Party seek to further regulate companies like Facebook and Twitter.

But Republican politicians wouldn’t be inclined to favor any government intervention if the approach didn’t also resonate with at least some Republican base voters, which Brewer said has become somewhat more populist and somewhat less libertarian.

“That libertarian strain in the economy and regulatory areas has faded,” Brewer said. “It hasn’t disappeared, but it’s not nearly as strong as it used to be. So I think it’s certainly, populism is part of the explanation, that the party’s become more populist in recent years. But I think it’s also that it’s become less libertarian, and those things are obviously not separated from each other entirely.”