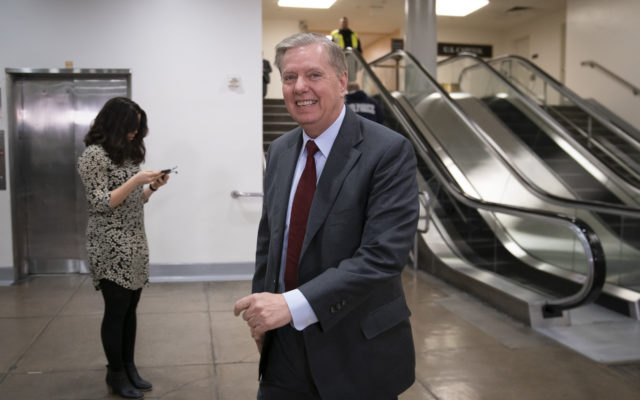 Senate Judiciary Committee Chairman Lindsey Graham, R-S.C., smiles as he heads to a briefing by Secretary of State Mike Pompeo, Defense Secretary Mark Esper, and other national security officials on the details of the threat that prompted the U.S. to kill Iranian Gen. Qassem Soleimani in Iraq, Wednesday, Jan. 8, 2020 on Capitol Hill in Washington. (AP Photo/J. Scott Applewhite)

Senator Lindsey Graham introduced a resolution Thursday condemning Speaker Nancy Pelosi for not immediately transmitting the articles of impeachment to the Senate after the House voted to impeach President Trump in December, and demanding that the House deliver the articles immediately.

“It is our job as Senators to dispose of the articles that were lawfully passed. The Speaker’s attempt to shape or delay the trial is unprecedented. It cannot stand,” Graham said in a statement. “What the Speaker has been doing is inconsistent with the Constitution and unfair to the President and the American people.”

“You will keep asking me the same question. I will keep giving you the same answer,” Pelosi said in her weekly press conference on Capitol Hill on Thursday morning. “As I said right from the start, we need to see the arena in which we are sending our managers. Is that too much to ask?”

“I’m not holding them indefinitely. I will send them over when I’m ready and that will probably be soon,” she added.

But Senate Majority Leader Mitch McConnell announced Tuesday that Republicans have the votes to pass the organizing resolution determining the rules of the trial, which would mirror the procedures used in the Clinton impeachment trial. Under the resolution, House impeachment managers and the president’s defense team would deliver opening statements before the Senate would vote on whether to call witnesses or consider new evidence. Democrats have pushed for an agreement on witnesses and evidence before a trial gets underway.

Some Senate Democrats are also beginning to question the wisdom of withholding the articles of impeachment from the Senate and delaying the trial in the upper chamber.

“We are reaching a point where articles of impeachment should be sent and we should have votes on whether witnesses will be called,” Senator Richard Blumenthal told reporters Wednesday on Capitol Hill.

However, Blumenthal backtracked a little on Thursday. “What I’ve heard from my Democratic colleagues is not only a sense of urgency about impeachment, but a trust in the judgment of Speaker,” he said. “And I think she will make the right decisions at the right time.”

Under Senate rules, the trial cannot begin until the House names impeachment managers to prosecute the case against Mr. Trump and then formally delivers the articles to the Senate. Graham has also suggested changing the Senate rules so that the trial could begin without receiving the articles from the House.