Gray parrots separated at zoo after swearing a blue streak 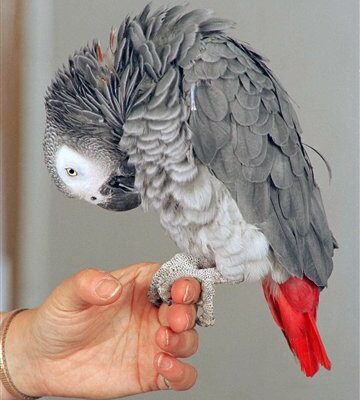 Alex the African gray parrot is held by animal psychologist Irene Pepperberg during an interview in Tucson, Ariz., June 1991. With Pepperberg's training Alex has acquired a large vocabulary which he uses in a sophisticated way. African grays are known to be the most proficient in learning human words, and Alex is exceptionally clever. (AP Photo/John Robert Miller)

LONDON (AP) — A British zoo has had to separate five foul-mouthed parrots who keepers say were encouraging each other to swear.

“We are quite used to parrots swearing, but we’ve never had five at the same time,” said the zoo’s chief executive, Steve Nichols. “Most parrots clam up outside, but for some reason these five relish it.”

Nichols said no visitors had complained about the parrots, and most found the situation funny.

“When a parrot tells tells you to ‘f-— off’ it amuses people very highly,” he said Tuesday. “It’s brought a big smile to a really hard year.”

Nichols said the parrots have been separated to save children’s ears. They were moved to different areas of the park so they don’t “set each other off,” he said.