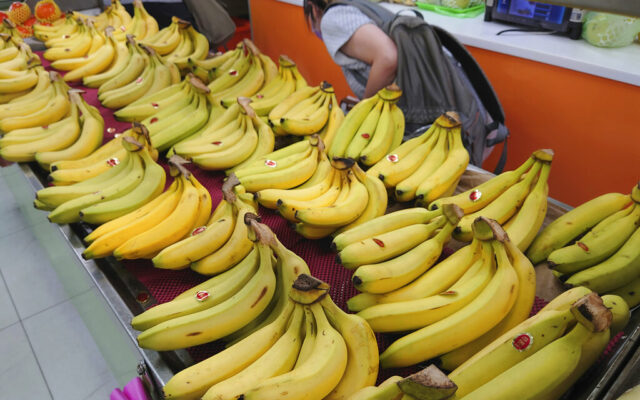 Taiwanese bananas for sale are on display at a fruit stall in Taipei, Taiwan, Monday, Sept. 20, 2021. Taiwan's foreign minister said Sunday, Sept. 19, 2021, that a new tropical fruit import ban by China was a “hostile move”, amid souring relations between the two governments. (AP Photo/Chiang Ying-ying)

THESSALONIKI, Greece (AP) — Authorities in Greece say four British nationals have been arrested on drug smuggling charges after nearly 300 kilograms (660 pounds) of cocaine was found stashed in a shipment of bananas from South America.

The suspects were arrested at a rental home near the northern Greek city of Thessaloniki, and were identified only as residents of London and Liverpool, men aged 38, 45, 48, and 52, police in the city said Friday, giving no further details.

A fifth British man, believed to be outside the country, was also wanted for questioning, police said.

The arrests followed an international law enforcement operation that also involved Italian customs authorities and the U.S. Drug Enforcement Administration, Greek officials said, adding that the seized drugs had been bound for other European countries and Australia.