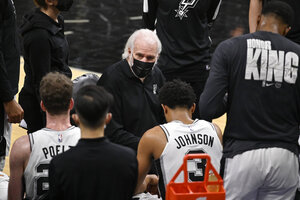 “That’s a pretty mystifying decision considering the situation that we’re all in, but as far as the players go, we listen to the NBA, not Governor Abbott,” he said.

The governor’s executive order, which will take effect on March 10, also lifts capacity restrictions imposed on the state’s businesses.

“It puts a lot of businesses in a tough spot, I think,” Popovich said. “They’re trying to do a good job of keeping everybody safe. Of course, they want to open up. But getting rid of masks, just seems ignorant to me. You know it’s like, we have to have instant gratification, we have to act like, you know, the pandemic is over. We already went through this once and now we’re going to do it again?”

Despite federal officials urging states to not abandon COVID-19 precautions, Texas will join a dozen other U.S. states that do not currently have a statewide requirement to wear masks. Health data also shows the state continues to record worrying new cases of COVID-19 and hospital admissions, making it one of just three “red states” — states with the most concerning test positivity data. Since the pandemic began, the Lone Star state has had more than 2.6 million coronavirus cases and 44,000 deaths due to COVID-19.

“When all of a sudden we act like it’s over with, when all the science tells us the opposite, it’s basically okay, you’re saying, ‘You get infected, you die. It’s the way it goes. We got to open up!'” Popovich said. “That’s not the way to do it. This is really ridiculous.”

However, Abbot still cautioned at a news conference Tuesday that lifting the mask requirement “does not end personal responsibility.”

“Personal vigilance to follow the safe standards is still needed to contain COVID. It’s just that now state mandates are no longer needed,” the governor said.

Alexander Tin contributed to this report.