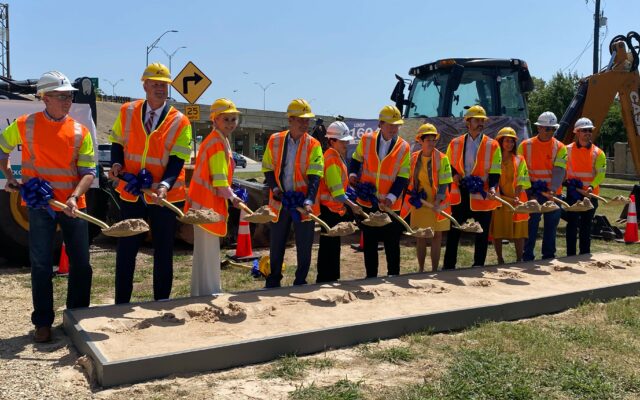 “Whether you’re working, whether it’s parents dropping kids off, whether it’s senior citizens going to a doctor’s appointment or kids trying to get to UTSA, it’s our job as community leaders to ensure they all have state-of-the-art infrastructure that’s accessible, reliable, efficient and, most important, safe,” Senator Jose Menedez said. Menedez represents portions of Bexar County that includes San Antonio, Converse, Leon Valley, Windcrest and Live Oak.

The $1 billion dollar project will include expanding the highway from four lanes to ten lanes, including a high occupancy vehicle lane each way, reconfiguration of exit and entrance ramps, replacement of the cloverleaf interchange at Interstate-10 and Loop 1604 to a five-level direct connect interchange, improvement at the Blanco Road and Loop 1604 intersection as well as accommodations for pedestrians and bicyclists. Water quality protection and other highway features are planned, TxDOT said.

The first phase that broke ground today comes with a price tag of $148 million and is already funded through appropriations via propositions passed in 2014 and 2015.

Bugg said San Antonio is on track to grow from 2.6 million people today to 4.6 million in 2050 and is expected to grow at a rate faster than the rest of the state in the same time period.

The project is broken up into five construction segments, starting with the phase that broke ground this morning, with the goal to decrease commute times for more people with improved traffic flow and safety in addition to transportation accommodations for pedestrians and cyclists.

The construction on the first phase of construction started today is expected to finish by 2024 at the earliest and drivers will experience changes or disruptions to commutes in this area as the project begins.

“Loop 1604 is an important corridor for safety, for the transportation of goods and services, and it’s a huge economic development driver for this region,” Webb, who also serves as the Policy Board Chair for the Alamo Area Metropolitan Planning Organization, said.

The next segment to start will be construction on Interstate-10 and U.S. 281 later this summer, followed by the Loop 1604 and Interstate 10 interchange in the Fall. The final two segments are improvements on U.S. 281 to Redland Road and the final segment will be from Redland Rd. to Interstate-35.

Don Morgan contributed to this report.