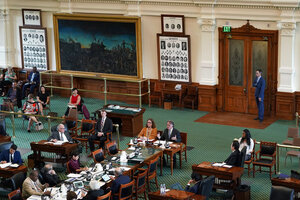 Dr. David Lakey, Vice Chancellor for Health Affairs and Chief Medical Officer for the University of Texas System, center right, and Dr. Laurel Williams, Chief of Psychiatry, Director of Residency Training and Associate Professor of Psychiatry and Behavior Sciences, Texas Children's Hospital and Baylor College of Medicine, center left, testify on the second day of a hearing in the state senate chamber, Wednesday, June 22, 2022, in Austin, Texas. The hearing is in response to the recent school shooting in Uvalde, Texas, where two teachers and 19 students were killed. (AP Photo/Eric Gay)

AUSTIN, Texas (AP) — The first public hearings in Texas looking into the Uvalde school massacre have focused on a cascade of law enforcement blunders, school building safety and mental health care with only scant mentions of the shooter’s AR-15-style semi-automatic rifle and gun reform.

A day after the head of the Texas state police called the law enforcement response to the May 24 slaughter an “abject failure,” Texas senators on Wednesday turned their attention to mental health funding for schools and a shortage of counselors and mental health providers.

So far, lawmakers and witnesses at the hearings have barely mentioned the gun debate. During one of the few times it did come up, Democratic Sen. Jose Menendez asked Col. Steve McCraw, director of the Texas Department of Public Safety, whether the attacker could have done as much damage with a bat, knife or revolver.

The bungled response to the attack that left 19 children and two teachers dead at Robb Elementary has infuriated the nation, and a recent wave of deadly mass shootings has renewed a push for more gun laws.

The hearing Wednesday in Texas had barely started when lawmakers not on the committee sparred over what kind of guns should even be allowed in the state Capitol, where handguns are, and rifles are not. Rep. Gina Hinojosa, a Democrat, tweeted that lawmakers should “be real about our ability to keep public safe from AR-15s.” Briscoe Cain, one of the most conservative members of the House, replied that long rifles “should not be banned at the Capitol.”

“We are tired of these do-nothing committees and roundtables that have been happening after every mass shooting in Texas,” said Melanie Greene of Austin. “They talk about what went wrong and its usually everything but guns. We’re tired of all the talk and we want some action.”

The group wants lawmakers to consider raising the age of gun ownership from 18 to 21 years old, background checks on all gun sales and a ‘red flag’ law in Texas to allow authorities to take weapons from those deemed to be a danger to themselves or others. The gunman at Robb Elementary was an 18-year-old former student, Salvador Ramos.

Greene is not optimistic any of those ideas will be embraced by the Republican-dominated panel.

“This committee is a dog-and-pony show. It’s performative political theater. But we’re not going to give up. We’re going to keep coming back,” Greene said.

Still, it’s the delays and mistakes in the law enforcement response at Robb Elementary School that are the focus of federal, state and local investigations.

The state’s public safety chief said Tuesday that police had enough officers and firepower at the school to stop Ramos three minutes after he entered the building but they instead waited more than an hour before storming the classroom and killing him.

McCraw outlined a series of missed opportunities, communication breakdowns and errors based on an investigation that has included roughly 700 interviews. He also directed much of the blame at Pete Arredondo, the Uvalde school district police chief who McCraw said was the commander in charge.

Arredondo, who testified Tuesday at a closed-door hearing of a Texas House committee, has said he didn’t consider himself in charge and assumed someone else had taken control. He has declined repeated requests for comment from The Associated Press.

Uvalde’s mayor pushed back on McCraw’s testimony casting blame on Arredondo, saying the Department of Public Safety has repeatedly put out false information about the shooting and glossed over the role of its own officers.