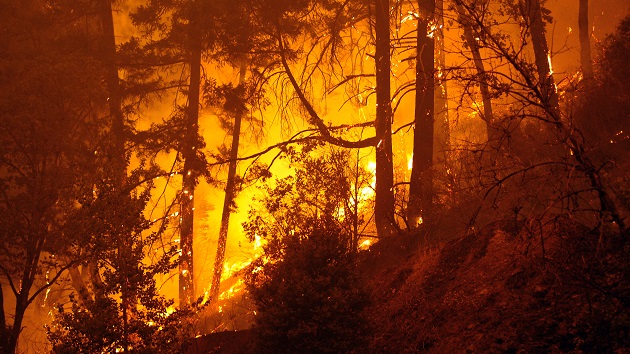 REDDING, CALIFORNIA - AUGUST 04: Fire burned along both sides of Highway 299 in the Shasta-Trinity National Forest after a forest fire breaks out near Redding, California, United States on August 04, 2021. (Photo by Neal Waters/Anadolu Agency via Getty Images)

A frontal system moving into the region will bring winds with speeds up to 40 mph, which, combined with extremely dry vegetation, won’t bode well for firefighters battling the blazes. Dry lightning is also a threat to Oregon and Northern California, which are facing some of the largest fires in the country.

About 90 large wildfires, many of them uncontained, are currently burning in the West.

Red flag warnings and fire weather watches have been issued from Washington down the Pacific coast to California. Heat alerts are also in effect from Washington to Arizona, and some areas in the Southwest could reach 120 degrees.

The Dixie Fire, the largest wildfire in California that has been burning near Feather River Canyon for weeks, has now burned through nearly 255,000 acres after the flames jumped a containment line Tuesday.

Video taken out of Greenville, California, shows firefighters struggling to battle control massive flames from the Dixie Fire, which has been exhibiting extreme fire behavior due to the current conditions.

Images taken Tuesday also showed the Meadow Valley in Plumas County engulfed in smoke and flames from the Dixie Fire.

The Monument Fire in Big Bar, California, had grown to more than 9,000 acres, more than doubling by Wednesday, and is 0% contained.

The spread of the wildfires had slowed last week but increased again as moisture from the monsoons in the Southwest disappeared, with lightning strikes alone sparking nearly three dozen more fires over the weekend.

Evacuations have been ordered due to the Dixie Fire, the Monument Fire and the Boulder 2700 Fire — near Polson, Montana — which have destroyed multiple structures.