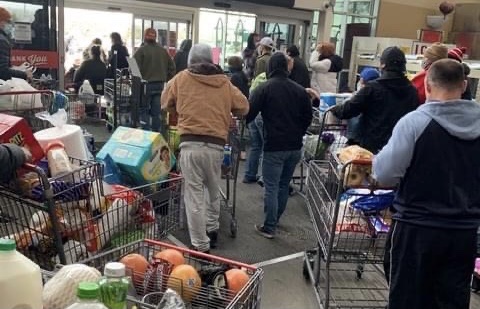 SAn ANTONIO (KTSA News) – Tim Hennessy and his wife were halfway done with their grocery shopping at H-E-B this week when the power went out. They continued to pick up a few more things they needed before the next snowstorm. While many shelves at the Austin-area store in Leander were empty, there were still plenty of items to meet their needs.

A few minute later, an employee  asked them to head to the checkout area where about 100 people were waiting to pay.

In a Facebook post titled “The Heart of America,” Hennessy said the line they were in was barely moving, but then suddenly, it started going pretty fast.

.”We both thought: ‘Wow, they are checking out people quickly. Must be all hands on deck,’” said Hennessy.

When they got to the checkout, the woman asked if they had any alcohol, and Hennessy replied, “No, but if you are giving out drinks, I could use one about now.”

The woman asked them to “go ahead” with their groceries, but the workers wouldn’t be able to bag anything.

”At first, Deb and I were a bit confused and I asked: ‘How or who do we pay for our groceries?’ “We probably had a couple of hundred dollars worth of groceries.”

The H-E-B employee told them to go ahead and drive home safely.

“Deb  began tearing up, which always gets me teared up, too – as we could not believe the generosity of H-E-B and the kindness of that wonderful gesture,” said Hennessy. “This is the America that I know. Despite all the negative we hear/see being reported daily in the news. America and most Americans are still kind, thoughtful, generous, and caring.”