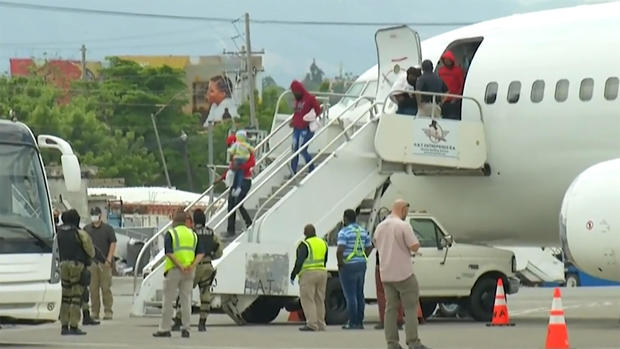 Correspondent Manuel Bojorquez reports that most of the migrants, who have been living in a makeshift camp near the border in Del Rio, are Haitians, many of whom who migrated to South and Central America after the devastating earthquake in 2010. They came to the U.S. border recently after hearing rumors that they would be allowed to cross, hoping for a better life up North, but most will likely end up back in Haiti.

More than 300 Haitians arrived back in their home country Sunday, and more deportation flights are planned this week, as the U.S. government tries to process the more than 12,000 migrants camped out near Del Rio, Texas.

With this section of the U.S.-Mexico border closed, many of the migrants tried to cross the Rio Grande over the weekend, but were confronted by Border Patrol agents on horseback.

Thirty-six-year-old Haitian migrant Alex Rosiere said, “I don’t want to be deported. If I am deported now, I’ll die in Haiti. Why? Because there’s no security in Haiti.”

Val Verde County Sheriff Joe Frank Martinez wants the federal government to do more. “It takes too long to process an asylum claim,” he said. “The system has been broke for 40 or 50 years. It’s used as a political football, you know, from one agenda to the next.”

In an interview with CNN, Secretary of Homeland Security Alejandro Mayorkas said the U.S. government is working to move thousands of the migrants every day to processing centers. “We have sent a very clear message early on, in light of the fact that we are in the midst of a pandemic, that the border is not open, and people should not take the perilous journey here,” he said.

In that interview, Mayorkas was asked if there’s a contradiction because the U.S. is welcoming refugees from Afghanistan, but deporting Haitians in need. He replied that the Afghan nationals are being screened and vetted before being flown to the U.S., and that is different than simply showing up at the border.