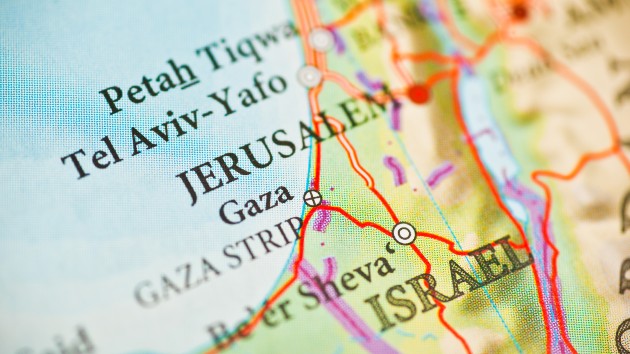 (JERUSALEM) — Hamas, the Palestinian militant group ruling the Gaza Strip, is willing to enter into a ceasefire agreement with Israel’s military contingent on two conditions, according to a senior Hamas official.

“We informed all parties that we would accept a mutual ceasefire between Israel and Hamas with two conditions,” Dr. Basem Naim, a former Palestinian health minister who is now head of Hamas’ international relations council, told ABC News on Tuesday evening. “One, Israeli forces must stop incursions into the Al-Asqa compound and respect the site. Two, Israel must stop the forced evacuation of the Palestinian residents in the Sheikh Jarah neighborhood. This condition is in accordance with international law, not only a condition expected by the Hamas authority.”

Israel, however, is not interested, according to an Israeli official with direct knowledge of the matter.

“We say to stop prematurely is to give Hamas the victory it wants,” the Israeli official told ABC News on Tuesday evening. “Hamas has to come out of this defeated.”

The apparent stalemate comes as the latest round of fighting between the two sides enters its 10th straight day. Hamas, which gained a majority in the 2006 Palestinian legislative elections and took control of the Gaza Strip in 2007 after battling rival Palestinian forces, has said that its rocket attacks on Israel were in response to the recent clashes between Palestinian protesters and Israeli police in Jerusalem’s Old City outside the Al-Aqsa Mosque compound, one of the holiest sites in Islam, amid growing anger over the potential eviction of dozens of Palestinians.

Hundreds of thousands of Palestinians fled or were displaced from their homes during a war that accompanied Israel’s creation in 1948. Some Palestinian refugees were rehoused in the Sheikh Jarrah neighborhood of east Jerusalem, just outside the Old City, by the Jordanian government in the 1950s — before Israel captured the city from Jordan during the 1967 war, along with the Gaza Strip and the West Bank. Now, several Palestinian families are facing possible eviction from homes on land that Jewish settlers claim they lost to Arabs during the 1948 war. Israeli law allows citizens to take back such land but it does not allow Palestinians to do the same.

Massive protests against the decades-old legal battle have taken place in and around Jerusalem’s Old City in recent weeks. Hundreds of people were injured earlier this month after Israeli police fired tear gas and stun grenades at Palestinian demonstrators who hurled rocks and chairs outside the Al-Aqsa Mosque. Then on May 9, the Israeli Supreme Court decided to delay a ruling on the eviction case by up to 30 days after the attorney general requested more time to review.

Hamas and Islamic Jihad, a smaller Palestinian militant group, began firing a barrage of rockets toward Israeli territory on the night of May 10. In response, the Israel Defense Forces (IDF) unleashed airstrikes aimed at what it said were Hamas and other terror targets in the Gaza Strip, a 140-square-mile territory where two million Palestinians have lived under a blockade imposed by neighboring Israel and Egypt since Hamas seized power.

Since then, at least 219 people — including 63 children and 36 women — have been killed by the Israeli airstrikes in the Gaza Strip. About 1,530 others have been wounded so far, according to the Palestinian Ministry of Health.

Meanwhile, at least 12 people — including a soldier and a 6-year-old child — have been killed by the rocket attacks in Israel. Another 324 have been injured, according to the IDF.

The IDF said that Hamas and Islamic Jihad have fired more than 3,700 rockets from the Gaza Strip into southern and central Israel since May 10, of which approximately 540 misfired and exploded inside the Palestinian territory. Israel’s air defense system, known as the Iron Dome, has intercepted about 90% of the rocket attacks, according to the IDF.

The rockets were aimed at various Israeli cities, including Jerusalem and Tel Aviv, with some striking multiple homes as well as a school, a hospital and a bus.

Meanwhile, the Israeli military has conducted over 1,450 airstrikes on the Gaza Strip since May 10, according to the Palestinian Ministry of Health, which said the attacks are targeting “densely populated residential areas” and have destroyed more than 1,000 houses and apartments as well as dozens of government buildings, schools and businesses. Some 40,000 families have been displaced so far, the health ministry said, warning of overcrowded shelters becoming “a dangerous environment for the rapid spread of COVID-19.”

Unlike Israel, the Gaza Strip has no air raid sirens or bomb shelters. However, the IDF has said it warns people to evacuate before striking targets in civilian areas.

The IDF said its airstrikes have hit more than 820 terror targets in the Gaza Strip, including rocket launch sites in civilian areas, attack tunnels along the border, several homes purportedly belonging to Hamas commanders and a number of high-rise buildings in Gaza City that Israeli officials alleged were used by Hamas’ military wing. Among the targets was a building that housed offices of The Associated Press, Al-Jazeera and other media outlets.

On Sunday, Israeli warplanes carried out extensive airstrikes targeting an underground network of tunnels that the IDF said Hamas had dug in the northern Gaza Strip near the Israeli border. But the Palestinian Ministry of Health said it was the deadliest single attack on Palestinian civilians yet since both sides began trading rockets and airstrikes. At least 42 people, including medical doctors, were killed, according to the health ministry.

IDF spokesperson Lt. Col. Jonathan Conricus has since acknowledged that there were, “unfortunately, unintended civilian casualties.” In one instance, an Israeli airstrike targeted a Hamas tunnel beneath the Rimal neighborhood of the Gaza Strip and the tunnel collapsed, compromising the underlying support structures of several nearby residential buildings, according to Conricus, who said the IDF is reviewing the incident and will adjust the analysis and ordinance used in the future.

“That caused a large number of civilian casualties, which was not the aim,” Conricus said at a press conference on Tuesday evening.

The United States has deployed a delegation to the Middle East to meet with leaders from both sides, amid growing fears that the Israeli military would launch a ground invasion of the Gaza Strip.

U.S. President Joe Biden has spoken to both Israeli Prime Minister Benjamin Netanyahu and Palestinian President Mahmoud Abbas. Biden talked with the Israeli prime minister again on Monday, and a readout of that telephone conversation from the White House said that Biden “reiterated his firm support for Israel’s right to defend itself against indiscriminate rocket attacks” but also “expressed his support for a ceasefire.” However, sources told ABC News that the U.S. president took a tougher tone with Netanyahu than he has publicly or on previous private calls, conveying the message that he could only provide cover for so long from the growing calls in the United States and around the world for Israel to take a different approach in the Gaza Strip.

During a press conference on Monday night, Netanyahu said the offensive would continue.

“The directive is to continue to strike at the targets of terrorism,” Netanyahu said. “We will continue to act as necessary to restore peace and security to all residents of Israel.”

Palestinians want to include the Gaza Strip and the West Bank — a landlocked territory bordered by Israel and Jordan — in their future state, with east Jerusalem as their eventual capital. The U.S. government has voiced support for a two-state solution to the Israeli-Palestinian conflict, which would create an independent Israel and Palestine. However, former U.S. President Donald Trump recognized Jerusalem as Israel’s capital in 2017 and relocated the U.S. embassy there from Tel Aviv in 2018, a controversial move that was welcomed by Israelis and condemned by Palestinians.