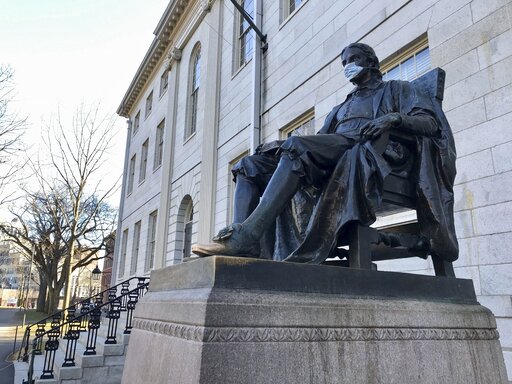 The John Harvard statue at Harvard University, a popular tourist attraction at the campus in Cambridge, Mass, sits adorned with a medical mask as students prepared to leave campus, Saturday, March 14, 2020. The university has asked students to leave by Sunday afternoon and stay home after spring break to prevent the spread of the new coronavirus. For most people, the new coronavirus causes only mild or moderate symptoms, such as fever and cough. For some, especially older adults and people with existing health problems, it can cause more severe illness, including pneumonia. The vast majority of people recover from the new virus. (AP Photo/Collin Binkley)

Similar action was taken at Stanford, Princeton and Yale universities, which said they too will reject millions of dollars in federal funding amid growing scrutiny of wealthy colleges.

Officials at Harvard said the school still faces significant financial challenges due to the pandemic but will refuse the money over concerns that “intense focus by politicians” will undermine the relief program created by Congress.

Trump later thanked Harvard and Stanford at a White House press conference, saying he was pleased the schools turned down the funding.

Congress is offering $14 billion to the nation’s colleges and universities as part of a $2.2 trillion rescue package. Schools were allotted varying sums based on their size and the number of students they teach from poorer backgrounds.

But Trump says Harvard “shouldn’t be taking” its share because it has such deep financial reserves. It echoed concerns from other critics, including some alumni, who said Harvard doesn’t need the money and can rely on its nearly $40 billion endowment.