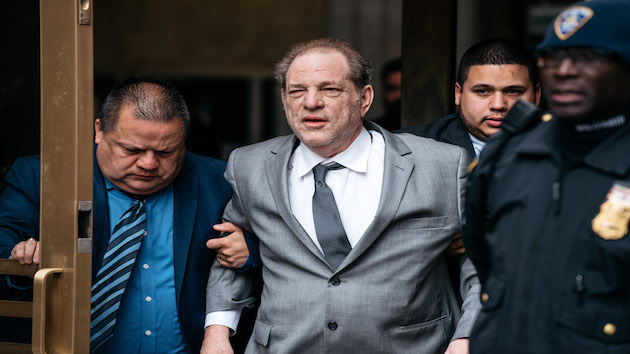 “This morning at approximately 9:25 custody of Mr. Harvey Weinstein was handed over to the appropriate officials for transport to the state of California per a court order,’’ the New York State Department of Corrections said in a statement Tuesday.

Allegations against the former film producer sparked the #MeToo social media campaign movement after dozens of women came forward to accuse him of sexual harassment and misconduct.

In February 2020 he was found guilty of criminal sexual assault and of rape in the third degree in Manhattan Supreme Court and was sentenced to 23 years in prison. He was serving out his sentence at Wende Correctional Facility. His lawyers filed an appeal of that conviction in April.

But his legal battles continue in California, where he faces further charges.

The Los Angeles District Attorney charged Weinstein with rape in January 2020, as his trial was beginning in New York.

In Los Angeles, he is charged with four counts of rape, four counts of forcible oral copulation, two counts of sexual battery by restraint and one count of sexual penetration by use of force. The counts involve five women and stem from alleged events in Los Angeles and Beverly Hills from 2004 to 2013.

This is a developing story. Check back for updates