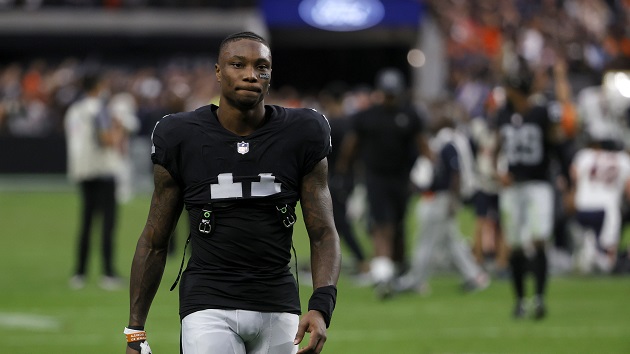 Ruggs, the team’s leading receiver, was driving a Chevrolet Corvette at about 3:30 a.m. on Rainbow Boulevard when his car hit the rear end of a Toyota Rav4, Las Vegas Metropolitan Police Department said.

The Toyota burst into flames, and police said they recovered a dead body inside the SUV.

Police said Ruggs, 22, stayed on the scene, but “showed signs of impairment.”

The Raiders were on their bye this week, so they did not play on Sunday.

In a statement, the team said, “We are aware of an accident involving Henry Ruggs III that occurred this morning in Las Vegas. We are devastated by the loss of life and our thoughts and prayers go out to the victim’s family. We are in the process of gathering information and will have no further comment at this time.”

Ruggs was a first-round pick of the Raiders in 2020, taken No. 12 overall. He was a star at Alabama, crossing 700 yards in his sophomore and junior seasons before entering the draft.

He has 24 catches for 469 yards in 2021. He also has two receiving touchdowns, which is tied for the team lead.

The speedy receiver had 452 receiving yards in his rookie season, with two touchdowns, but appeared to be breaking out in 2021 as the team’s top threat.