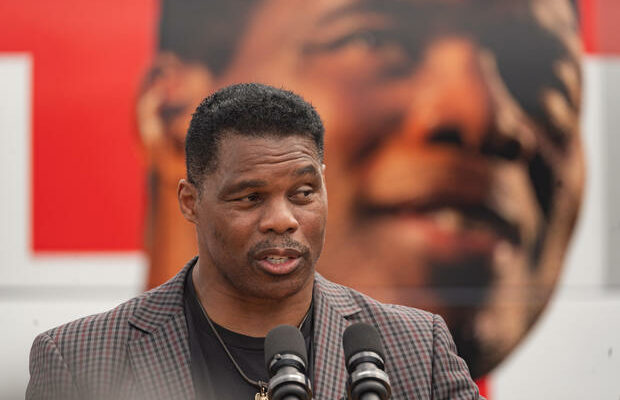 The Republican U.S. Senate candidate for Georgia, Herschel Walker, speaks at a campaign event on September 9, 2022 in Gwinnett, Georgia. Megan Varner / Getty Images
Herschel Walker, the Georgia Republican nominee for Senate, paid for an abortion for a woman he was dating in 2009, The Daily Beast reported Monday night. Walker vehemently denied the story, called it a “flat-out lie” and threatened to sue the outlet.

CBS News has not confirmed the allegations and reporting by The Daily Beast.

The Daily Beast reported that Walker “urged” the woman to get an abortion because “the time wasn’t right for a baby.” After she had the procedure, the story says that she received a $700 check from him and a “get well” card.

The reporter, Roger Sollenberger, wrote that the woman wanted to remain anonymous for  “privacy concerns.” He corroborated the story with one of the woman’s close friends and also reported that the procedure took place when Walker was not married.

In a statement posted on Twitter, Walker criticized the reporter and said, “This is another repugnant hatchet job from a Democrat activist disguised as a reporter who has obsessively attacked my family and tried to tear me down since this race started.”

The Daily Beast previously reported that Walker has four children, three sons and one daughter. He had not publicly disclosed three of the four before his Senate run but did so in June, after the report.

“He’s called my children ‘secret’ because I didn’t want to use them as campaign props in a political campaign. Now, they’re using an anonymous source to further slander me. They will do anything to hold onto power. It’s disgusting, gutter politics,” Walker said. “I’m not taking this anymore.”

Walker added he is planning to sue the Daily Beast “for this defamatory lie” and that his lawsuit would be filed Tuesday morning. However, Walker’s lawyer, Robert Ingram, told CBS News Tuesday, “We are currently considering our options, but no final decision has been made on the future handling of this matter.”

When he was asked by Fox News host Sean Hannity in an interview Monday about the “get well” card and the $700 check, Walker called it a lie and that he’s “never asked anyone to get an abortion.” Pressed again about the $700 check, he replied that he sends money “to a lot of people.”

Walker is in one of the the tightest Senate elections in the country, against Democratic incumbent Sen. Raphael Warnock. Asked for his response to The Daily Beast’s report, Warnock told the Atlanta Journal Constitution, “I’ll let the pundits decide how they think it will impact the race.”

A CBS News poll on the race last month found Warnock has a two-point edge over Walker. According to the survey, 58% of registered voters dislike how Walker handles himself personally, and 67% of voters who say abortion is their top issue are choosing Warnock.

Walker has previously said he is against abortions and that he has “no exception” in his mind.

“I believe in life. I’m a Christian,” Walker said at a presser in mid-September. “And it is strange that my opponent– he seems to be really excited about a woman killing her baby. He said, up until birth, it’s okay for a woman to kill her baby. What is his term, ‘it’s not right to have a doctor and a patient and the government all in the same room.’ And I say, `Do you not realize there’s a baby in that room too?'”

The National Republican Senatorial Committee has spent $17,837,060 on advertisements and ad reservations for Georgia’s Senate race, according to AdImpact. The committee said it would continue to support Walker, and called The Daily Beast’s report “innuendo and lies.”

In a statement Tuesday, NRSC Chairman Rick Scott said, “when the Democrats are losing, as they are right now, they lie and cheat and smear their opponents. That’s what’s happening right now.” He then equated the story to “the smears they attempted against Brett Kavanaugh and Clarence Thomas, and it will not work.”

“Herschel has denied these allegations and the NRSC and Republicans stand with him, and Georgians will stand with him too,” Scott said.

After Walker’s initial denial of the story, one of his sons, Christian Walker, said on Twitter, ” I would really appreciate if my father Herschel Walker stopped lying and making a mockery of us.”

“Every family member of Herschel Walker asked him not to run for office, because we all knew (some of) his past. Every single one. He decided to give us the middle finger and air out all of his dirty laundry in public, while simultaneously lying about it. I’m done,” he said in a different Tweet.

Christian Walker has not yet responded to CBS News requests for further comment. He posted additional videos on Twitter on Tuesday in which he said, “It’s literally his handwriting in the card.”

When asked about his son’s Tweets, Herschel Walker’s campaign responded with a text pointing to a Tweet from Herschel Walker that says, “I LOVE my son no matter what.”

Elizabeth Campbell contributed to this report.