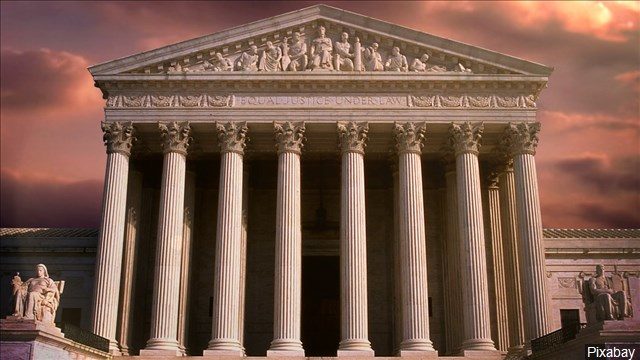 WICHITA, Kan. (AP) — Donaldo Morales caught a break when federal prosecutors declined to charge him after he was arrested for using a fake Social Security card so he could work at a Kansas restaurant. But the break was short-lived. Kansas authorities stepped in and obtained a state conviction that could lead to Morales’s deportation.

A state appellate court overturned the conviction, but Kansas appealed. On Wednesday, the U.S. Supreme Court will hear arguments about whether states can prosecute immigrants like Morales who use other people’s Social Security numbers to get a job.

Morales, who plans to attend the arguments with his wife and a son, said he has been having nightmares about being deported. His greatest fear is leaving behind his wife and children if the Supreme Court reinstates his state convictions — felonies that could trigger deportation proceedings.

“What I did was to earn money honestly in a job to support my family,” the 51-year-old Guatemalan immigrant told The Associated Press in Spanish.

The case before the nation’s highest court arises from three prosecutions in Johnson County, a largely suburban area outside Kansas City, Missouri, where the district attorney has aggressively pursued immigrants under the Kansas identity theft and false-information statutes.

The Kansas Supreme Court overturned the convictions of Morales as well as Mexican immigrants Ramiro Garcia and Guadalupe Ochoa-Lara after concluding the state was seeking to punish immigrants who used fake IDs to obtain jobs. It ruled that the federal government has exclusive authority to determine whether an immigrant is authorized to work in the United States. Kansas then appealed.

The Trump administration has filed a brief supporting Kansas, arguing that federal law does not prohibit the prosecution of immigrants for violating identity theft laws and contending that protection against fraud is among the oldest state powers.

“In the modern era, those crimes increasingly involve identity theft — a serious and ‘growing problem’ throughout the United States,” Solicitor General Noel J. Francisco said in a brief.

That approach marks a shift from that of the Obama administration. When Arizona tried to use identity theft laws to prosecute noncitizens for working illegally, the Justice Department under President Barack Obama argued that only the federal government has such authority.

Rekha Sharma-Crawford, an attorney representing the immigrants, said in an email that immigration officials are having the state to do its bidding by using routine encounters with noncitizens to “strong arm businesses” to turn over personnel files.

“This has a chilling effect for local businesses, spreads deep mistrust for law enforcement in immigrant communities and also destroys families who are an integral part of the societal fabric,” Sharma-Crawford said.

Morales, who has been living in the United States since 1989, was found guilty of state charges for identity theft and putting false information on employment forms related to his work at a Jose Pepper’s restaurant.

The other two prosecutions in the appeal also involve immigrants who unlawfully worked in the United States.

After Garcia got a speeding ticket on his way to his restaurant job, a local detective and a federal agent checked his employment paperwork at the Bonefish Grill. His attorneys told the court the federal government didn’t charge Garcia because he was cooperating with an investigation into a previous employer suspected of directing employees to change Social Security numbers. The local district attorney nonetheless charged him with identity theft, and pursued the state case even after Garcia obtained lawful immigration status.

Ochoa-Lara came to the attention of authorities after using a false Social Security number to lease an apartment and was later prosecuted in state court for using someone else’s number on a tax withholding employment form.

The case wound up before the nation’s highest court after the Kansas Supreme Court held that the Immigration Reform and Control Act of 1986 preempts those state prosecutions for working unlawfully in the country.

Kansas contends the state’s Supreme Court ruling would frustrate its own efforts to combat identity theft. The state law generally criminalizes the use of any personal identifying information belonging to another person to obtain any “benefit” fraudulently, regardless of immigration status or work authorization.

“There is no point in prosecuting people who are misusing Social Security numbers to be employed if you can’t remove them from the United States because they will keep doing it because they have to, otherwise they can’t work,” said Anderson, who teaches homeland security law at Wichita State University.

Judge Kevin Moriarty, who presided over Morales’ and Garcia’s trials, had expressed concerns about both cases, according to transcripts in the Supreme Court record.

In Morales’ trial, Moriarty found the defendant guilty, but noted he wasn’t stealing from the government. “He’s putting money into Social Security that he’ll never be able to draw out,” said the judge, who has since retired.

The judge also noted that three of Morales’ four children were born in this country.

Morales, an Overland Park resident who has since gotten legal work authorization, is now employed by a landscaping company. He has also started his own landscaping firm as a side business.

His U.S.-born wife, Isleen Gimenez Morales, is a lawyer who works as a disability rights advocate. She said being part of a Supreme Court case like this is not the kind of excitement anybody wants.

“Knowing that the outcome of this case will shape the immigration and criminal law in this country, I think it compounds the stress and distraction that our family has because we know the weight that it carries,” she said.