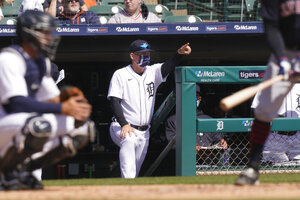 Detroit Tigers manager A.J. Hinch directs from the dugout during the second inning of a baseball game against the Cleveland Indians, Sunday, April 4, 2021, in Detroit. (AP Photo/Carlos Osorio)

HOUSTON (AP) — Detroit Tigers manager A.J. Hinch reflected on the Houston Astros sign-stealing scandal that cost him his job as the team’s manager in his return to Houston on Monday, saying it put a “cloud over the sport.”

Hinch was suspended by baseball Commissioner Rob Manfred for a year in January 2020 and subsequently fired by owner Jim Crane for his role in the scheme that violated rules by using a video camera to steal catchers’ signs during Houston’s run to the 2017 World Series title and again in the 2018 season.

He was hired by the Tigers this off-season and discussed the scandal prior to Monday night’s opener of a three-game series against the Astros.

Asked whether he still takes pride in leading the Astros to their first title in a season tainted by cheating, he gave a long and frank answer acknowledging the team’s wrongdoing.

“I do believe that we did some good things in Houston,” Hinch said. “I do believe we were wrong in the behavior and the decisions that we made in 2017, and it’s hard to have that cloud over the sport and be responsible for that and be the man that was that was the manager that it happened on my watch.”

Hinch spent five seasons in Houston, helping turn around a team that had sunk to embarrassing lows during a rebuild in the years before he arrived. The Astros won more than 100 games in each of his last three seasons, capped by a franchise-best 107 wins in 2019 when they lost to the Washington Nationals in the World Series.

Hinch added that he has largely been quiet in publicly reflecting on his time in Houston because his “relationship with that time is complicated.” He said he’s tried to keep the stain of his actions away from the Tigers since they hired him.

“It’s something I take very seriously,” he said. “I will continue to apologize not only to the Houston fans, but to all the fans around baseball and continue to repeat how wrong it was. And for that, we’re going to have to live with that for the rest of our careers. It’s part of my story.”

There’s been quite a bit of turnover on Houston’s roster since Hinch left, but several players remain from his teams and were excited about seeing him on Monday.

“He did amazing things for this organization,” shortstop Carlos Correa said. “It’s really special. I learned a lot from A.J. He was a great manager to us.”

The Astros have faced hostile and angry crowds on the road early this season from fans still upset about Houston’s cheating — spectators weren’t allowed to attend games last season because of the novel coronavirus pandemic.

Remaining players that were on a team proven to have cheated have faced taunts of “cheaters,” been subject to incessant boos and even had things thrown onto the field at them.

Hinch said some fans have “let me know that they haven’t forgot that I was on that team,” but that he hasn’t received nearly as much venom as the players have. He understands why people are still so upset, but that he doesn’t devote any energy to worrying about how fans have responded or will respond to him.

“It’s part of my of the back of my baseball card, so to speak,” he said. “And it’s going to be attached to me for the rest of my career. I’ve tried to continually show how contrite I am for for being the manager and how much wrong is wrong. Obviously, I served a punishment. I was out of baseball for a year.”

Aside from the team’s accomplishments and highlights on the field, one of Hinch’s most memorable moments with the Astros came in their first game at Minute Maid Park after Hurricane Harvey devastated the city in 2017.

“Standing in front of that crowd on that game, coming back and delivering a speech is probably the most nervous and most emotional that I’ve been wearing a uniform,” he said. “And that mattered to me and the people have let me know that mattered to them.”

Despite the way his time with the Astros ended, Hinch loved working in Houston and became emotional coming into town last night when he stayed in a hotel downtown for the first time since the World Series in 2019.

“I do have to focus on the good things that happened here,” he said. “I have a lot of fond memories, a lot of incredible interactions with fans and throughout the organization and some really, really good times. And then ultimately a really low time. And so, I kind of embrace all parts of that in my in my journey through this.”