Hospitalized COVID-19 patients in Bexar County double in one week 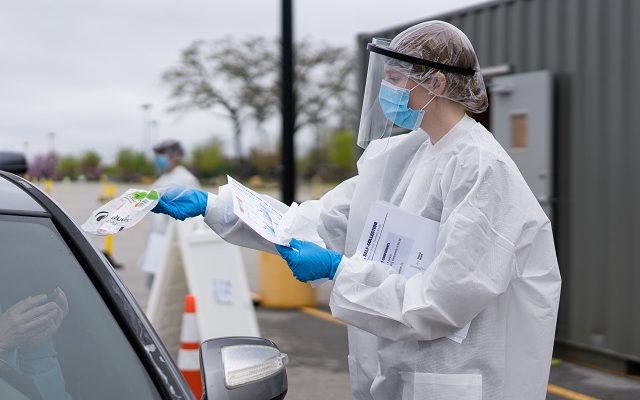 SAN ANTONIO (KTSA News) The COVID-19  warning indicators are going in “the wrong direction,” said Mayor Ron Nirenberg. The number of hospitalized coronavirus patients has more than doubled in the past week to 446. Nirenberg announced Monday that 124 of those patients are in intensive care, and 60 are on ventilators, triple the number from last week.

The  mayor announced 274 new confirmed coronavirus cases Monday, bringing the total since the pandemic began to 7, 156. There were no new deaths, leaving that number at 97.

The number of positive cases was expected to go up as more people were getting tested, but Dr. Anita Kurian with San Antonio Metro Health says the infection rate has accelerated “far beyond what anyone expected.” She said 28 percent of staffed hospital beds are available,”but if we keep seeing the same trend of infections, we are going to be in deep trouble soon.”

The positivity rate —the percentage of COVID-19 tests that come back positive —has nearly doubled in the past week to nearly 17 percent.

The doubling rate, which is the time it takes For the number of positive cases, has dropped to 13 days, well below the warning threshold  of 18.

“We’re not going to sugar coat this,” said Nirenberg. We promised to give you the good, the bad and the ugly.”

He says when Governor Abbott started opening up Texas, “we knew we were moving faster than the data, and now we know the effects of it.”

Nirenberg says many people abandoned the protocols they had been practicing because the opening of so many businesses led them to believe that we were out of the woods, but “this virus is more prevalent than it ever was.”

Dr. Kurian couldn’t say how many of the new positive COVID-19 cases are related to the large crowds turning out for the recent protests that began in San Antonio  May 30.

She said case investigators don’t specifically ask if the infected person attended a protest. They follow a standard questionnaire that asks if the patient attended large gatherings, and where they have been for the last fourteen days. Kurian said just about every infected person they questioned during the case investigations and contact tracing had visited more than one public location, such as restaurants, bars, grocery stores and hardware stores.

She did note that 57 percent of the new cases have occurred among close contacts. The infected person had been in close contact with someone who had COVID-19. In many cases, the close contacta family member or a coworker.