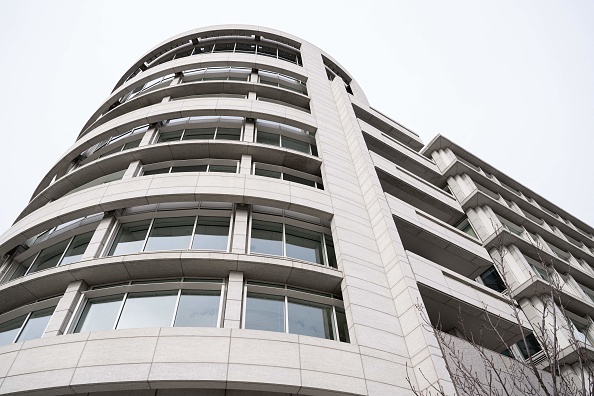 An office building housing the Penn Biden Center, a think tank affiliated with the University of Pennsylvania, is seen in Washington, DC, January 10, 2023, following reports that classified documents from the time when US President Joe Biden was serving as Barack Obama's vice president have been found at the center that Biden sometimes used as office space. - Lawyers for Biden discovered the documents last November while clearing out the office space and handed them over to the National Archives, which handles all such materials, Biden's special counsel Richard Sauber said. (Photo by SAUL LOEB / AFP) (Photo by SAUL LOEB/AFP via Getty Images)

Washington — The GOP-led House Oversight and Accountability Committee is seeking information from the University of Pennsylvania about foreign donations and visitors to the Washington think tank where documents marked classified from President Biden’s tenure as vice president were discovered, as the panel expands it probe into Mr. Biden’s handling of government records.

The committee’s chairman, Rep. James Comer of Kentucky, is requesting records related to donations from China to the university and the Penn Biden Center for Diplomacy and Global Engagement, as well as a list of all Chinese donors to both entities since the end of the Obama administration. He is also seeking information on all Penn Biden Center employees, a list of people who had keycard access to the think tank’s office and a log of visitors who met with Mr. Biden at its office.

“It is imperative to understand whether any Biden family members or associates gained access to the classified documents while stored at the Penn Biden Center,” Comer wrote in a letter to University of Pennsylvania President Liz Magill dated Wednesday.

The Kentucky Republican said the Oversight committee is “concerned about who had access to these documents given the Biden family’s financial connections to foreign actors and companies,” a reference to foreign business deals pursued by Hunter Biden, Mr. Biden’s son.

Comer said the House panel has learned the University of Pennsylvania received “tens of millions of dollars from Chinese sources,” and said donations originating from China more than tripled after the university announced the creation of the Penn Biden Center in February 2017.

“The American people deserve to know whether the Chinese Communist Party, through Chinese companies, influenced potential Biden administration policies with large, anonymous donations to UPenn and the Penn Biden Center,” he wrote.

A university representative did not immediately reply to a request for comment on the letter.

Comer also noted the overlap between numerous Penn Biden Center employees and officials serving in Mr. Biden’s administration, including Secretary of State Antony Blinken and Under Secretary for Defense Colin Kahl. Former University of Pennsylvania President Amy Gutmann was appointed to serve as U.S. ambassador to Germany, and chair of the Trustees of the University of Pennsylvania David Cohen is now the U.S. ambassador to Canada.

At her Senate confirmation hearing in 2021, Gutmann faced questions about donations the university received from China, and said that those donations constituted a “very small fraction” of more than $10 billion raised over the course of her tenure.

“A very small fraction of that comes from China, considerably less than 1%,” she told senators. “What I do know, and what I make sure of, is that no gifts, no contracts of the University of Pennsylvania are allowed to threaten academic freedom, are allowed to threaten national security. We do no classified research. We get about one gift per three minutes.”

The White House has come under pressure after it acknowledged roughly 10 documents bearing classification markings were discovered by Mr. Biden’s personal lawyers at the Penn Biden Center on Nov. 2. Other records marked classified were also found in the garage at the president’s Wilmington, Delaware, home in late December, though the White House did not disclose the discovery until last week.

The discoveries prompted the investigation from the House Oversight Committee, and Attorney General Merrick Garland appointed a special counsel, former federal prosecutor Robert Hur, to oversee an investigation into the documents found at Mr. Biden’s house and the Penn Biden Center.

The White House has stressed the president takes classified information seriously and has cooperated with the Justice Department. But officials have also sought to draw distinctions between Republicans’ reaction to documents marked classified found with Mr. Biden and the records bearing classification markings found by federal investigators at former President Donald Trump’s Florida residence, Mar-a-Lago.

“House Republicans have no credibility,” Ian Sams, a spokesman for the White House counsel’s office, said in a statement Monday after Comer requested visitor logs for Mr. Biden’s Wilmington house. “Their demands should be met with skepticism and they should face questions themselves about why they are politicizing this issue and admitting they actually do not care about the underlying classified material.”

In the case of Mr. Biden, roughly 20 documents in total have been found, while federal investigators found more than 300 records with classification markings at Mar-a-Lago, according to court filings.