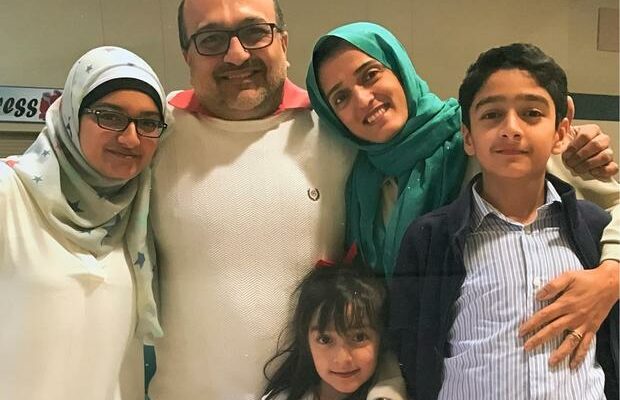 Doctor Hasan Gokal got in trouble for giving away 10 doses of vaccine that would have gone to waste/Photo-CBS
Dr. Hasan Gokal decided to give away 10 doses of the COVID-19 vaccine that were on the verge of going to waste, in what he thought was the responsible decision. Everything that came next was “an absolute, complete utter shock,” and “mind-blowingly unexpected,” he told CBS News.The Houston doctor who worked as Texas’ Harris County Public Health Department emergency response physician for the Office of Preparedness. He was also the medical director for the COVID-19 vaccine rollout for the county.

In late December of last year, he was supervising a vaccination event for emergency workers — the county’s first public vaccination event, he said. Within two weeks, he’d be fired and charged with theft for his actions that night.

As the event came to an end, one last person showed up for a shot. So, a new vial of the Moderna vaccine containing 11 doses was punctured to administer the vaccine, which activated the six-hour time limit for the 10 remaining doses.

The remaining 10 doses needed to be in arms within six hours or they would need to be thrown out, because they would have expired. Gokal said he was determined not to waste them. “This is a 5 million person county and we had the first 3,000 thousand doses. There was no room for throwing any of it out. Ever,” he said. “When you have something so precious, life-saving, it would hurt you to throw it away.”

With no other options, Gokal called a Harris County public health official in charge of operations to share his plan to find 10 people and administer them the remaining doses. He said he was told to go for it.

Because the event was the first time Harris County began vaccinating the public, Gokal said there were no protocol from the county that he could have followed at that point: “They did not exist. This was new scenario … You don’t have a precedence of this,” he said.

But he said there was guidance from the Texas Department of State Health Services to always try to find eligible people in that tier when there are leftovers vaccine doses at the end of a shift. If you can’t find anyone eligible, find someone willing and able to take it. The agency’s message, Gokal said, was clear: “We don’t want any doses wasted. Period.”

“At that point, I start going through my phone list, thinking of who might” fall under the 1(b) category (people over 65 or with a health condition that increases risk of severe Covid-related illness) Dr. Gokal said.

He scrambled to find 10 people who met the state’s vaccine requirements. Some were acquaintances; others, strangers. Among them were two women in their 70s. Two elderly women who are bed-bound. Their children in their 70s and who suffered from medical conditions also received the shot. A mother with a child who uses a ventilator, for whom catching the virus could’ve been a “death sentence,” Gokal said.

After midnight, and with just 20 minutes before the vaccine expired, the last person set to receive it canceled. Gokal said he was faced with two options: throwing away the last dose, or administering it to his wife, who suffers from pulmonary sarcoidosis, a lung disease that leaves her short of breath and that can be fatal. Given her condition, she was eligible, the doctor said.

Gokal said he never intended or planned to give any of his family members the shot unless it was through the “appropriate channels” — but given the unusual circumstances, he gave the last dose to his wife.

He submitted the paperwork for the 10 people he vaccinated the next morning at work and was transparent about what had happened the day before with his colleagues and supervisor, he said. A week later, he was fired.

Human resources told him that he should have returned the remaining doses, he said, even if that meant they would have been thrown away. Gokal, who immigrated from Pakistan when he was 10, said human resources also questioned the lack of “equity” among the list of people he had inoculated — suggesting there were too many Indian names in the group.

The Harris County Public Health Office of Communications said the department was unable to comment on the Gokal case.

Two weeks after being terminated, the doctor found out he had been charged with theft and accused of breaking county protocols by Harris County District Attorney Kim Ogg.

“He abused his position to place his friends and family in line in front of people who had gone through the lawful process to be there,” Ogg said. She said a week had passed before “he told a fellow Harris County Public Health employee, who then reported him to supervisors.”

A judge later dismissed the charges. The judge’s ruling, which said “the affidavit is riddled with sloppiness and errors,” noted the state didn’t “sufficiently allege that the complainant had a greater right to possession of the vaccine than the defendant, who by affiant’s own admission is ‘the medical advisor for the COVID-19 response.'”

The district attorney still intends to pursue a case in front of a grand jury. Gokal’s lawyers expect that to occur in the next two weeks. If indicted, he could face a year in prison.

Gokal’s lawyer, Paul Doyle, said that when he requested copies of the written protocols and waiting list referred to in the complaint, a prosecutor told him there wasn’t one, nor was there a written wait list.

In an email, Dane Schiller, the district attorney’s director of communications, said the office could not comment on the case, but referred CBS News to the charging document.

Gokal said he gets tears to his eyes each time he recounts the moment he found out that charges had been filed against him.

The hardest thing he’s had to deal with, he said, was to notice the fallout the situation had on his loved ones: His wife was struggling to sleep and her condition was deteriorating. His children now had difficulty focusing on their schoolwork: “It’s just been devastating,” he said.

“When I’m in the ER, when there’s a question mark as to what the right thing to do is, human life always trumps any policy issue. No one ever questions that,” said Gokal, who has a background is emergency medicine. Now, he says he’s dealing with the repercussions for not wasting a vaccine in the midst of a pandemic.

Gokal said he hopes that his experience won’t cause other doctors to lose their moral compass and to be dissuaded from doing “the right thing” when it comes to making decisions.

“It’s unfortunate I was the first one on the scene with this type of a situation and not several down the line, when they were realizing this should happen every time,” he said.

Earlier this month, both the Texas Medical Association and the Harris County Medical Society issued a statement which backed Gokal’s actions.

“It is difficult to understand any justification for charging any well-intentioned physician in this situation with a criminal offense,” the statement said.

Regardless of the outcome of the legal process, Gokal fears for his career.

“Everybody read the initial story and the initial reaction was, ‘These were vaccines for my parents, grandparents and frontline workers. How dare he steal these?'” Doyle said.

For now, Gokal spends his time volunteering at a charity health clinic.

“Given that the only alternative would be to throw the vaccines away, I wouldn’t have done anything different,” Gokal said. “I wouldn’t be a good physician if I said I regretted doing that.”