How a Texas ban on most abortions unfolded, and what’s next 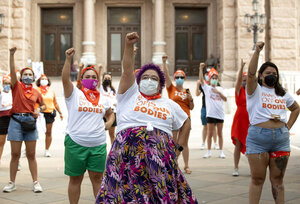 FILE - In this Wednesday, Sept. 1, 2021, file photo, Barbie H. leads a protest against the six-week abortion ban at the Capitol in Austin, Texas. Foes of the strict abortion ban passed in Texas are taking aim at companies that donated money to the bill’s sponsors, hoping consumers will pressure corporate America to join the fight against a surge of abortion restrictions. (Jay Janner/Austin American-Statesman via AP, File)

AUSTIN, Texas (AP) — Since early September, Texas has banned most abortions under a new law that has created the biggest curb to abortion in the U.S. in nearly 50 years.

Texas clinics and the Biden administration have spent weeks asking courts to halt the the law, known as Senate Bill 8, which bans abortions once cardiac activity is detected. That is usually around six weeks, which is before some women even know they are pregnant.

U.S. Attorney General Merrick Garland says the law is “clearly unconstitutional,” but judges have rejected both the Justice Department and clinics at nearly every turn. On Friday, the Biden administration said it would try taking its case to the U.S. Supreme Court.

Here is a timeline of key events so far:

MAY 19: Republican Gov. Greg Abbott signs the law in a ceremony at the Texas Capitol that is closed to the press and public. The law is solely enforced by private citizens, who are entitled to $10,000 in damages if they successfully sue abortion providers.

AUG. 27: The 5th U.S. Circuit Court of Appeals orders a halt on the lawsuit in Austin, eventually leading abortion clinics to ask the U.S. Supreme Court to intervene.

SEPT. 1: The law takes effect. Late that night, Supreme Court issues a 5-4 decision allowing the law to remain in place, without ruling on its constitutionality. Texas abortion clinics say they will abide by the restrictions.

SEPT. 6: Defending how the law makes no exceptions in cases of rape or incest, Abbott says Texas would strive to “eliminate all rapists from the streets,” drawing swift criticism. He also falsely asserts that women have “at least six weeks” under the law to get an abortion.

SEPT. 9: The Justice Department sues Texas, saying the law was enacted in “open defiance of the Constitution.”

SEPT. 15: Two weeks into the law, Texas abortion providers tell a court that the impact has been “exactly what we feared.” Out-of-state clinics say appointments are quickly filling as the majority of their patients now come from Texas.

OCT. 15: The Justice Department says it will take case to the Supreme Court.