How to help those devastated by earthquake in Haiti 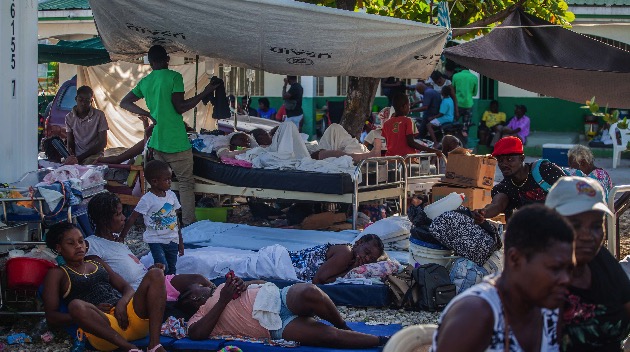 LES CAYES, HAITI - AUGUST 15: Haitians rest outdoors after a 7.2-magnitude earthquake on August 15, 2021 in Les Cayes, Haiti. Rescue workers have been working among destroyed homes since the quake struck on Saturday and so far there are 1,297 dead and 5.700 wounded. The epicenter was located about 100 miles west of the capital city Port-au-Prince. (Photo by Richard Pierrin/Getty Images)

(NEW YORK) — After a deadly 7.2-magnitude earthquake devastated Haiti Saturday morning, destroying hundreds of buildings and homes, the beleaguered country is in need of assistance as a new tropical storm threat approaches.

Haiti’s Civil Protection agency announced Sunday that the death toll is at least 1,297 with initial reports that indicate there are more than 700 collapsed buildings, including hospitals and schools, at least 3,778 homes destroyed and significant damage to infrastructure and roads. The country’s prime minister declared a monthlong state of emergency.

How people can help

Both nonprofit organizations originated from the front-line relief efforts from the 2010 earthquake in the same country. Now, 11 years later, Team Rubicon executive and military veteran Jake Wood explained what their services look like in action amid chaos and uncertainty.

“There is the literal fog of war that takes place in those moments,” Wood told ABC News. “As veterans being able to conduct that operational planning, identify those risks and mitigate them, work within those local populations was a huge benefit — to get out to otherwise denied areas.”

Americans can donate directly to Team Rubicon here and visit their site and social media channels for updates and information as the efforts continue.

There are already culinary students in Haiti hard at work making meals for first responders thanks to world renowned chef and hospitality executive José Andrés, who has traveled to Haiti over 20 times with the group, providing food in the wake of natural disasters.

Haitian communities in the United States have started to rally support for the struggling nation.

Yolette Williams of the Haitian American Alliance said that after the initial period of shock “you get into working mode” and think about “what are we going to do?”

In Brooklyn, New York Haitian Americans have held meetings to decide the best way to get crucial resources to loved ones.

Local organizations in Miami have also combined efforts to send medicine and nonperishables directly to first responders on the ground.

Marleine Bastien, executive director of the Family Action Network Movement, told ABC News “we want to do things differently” than how the response was handled 11 years ago.

“We don’t want a repeat of what happened in 2010, where a lot of international organizations collected millions and millions and the money never reached the impacted people,” she said.