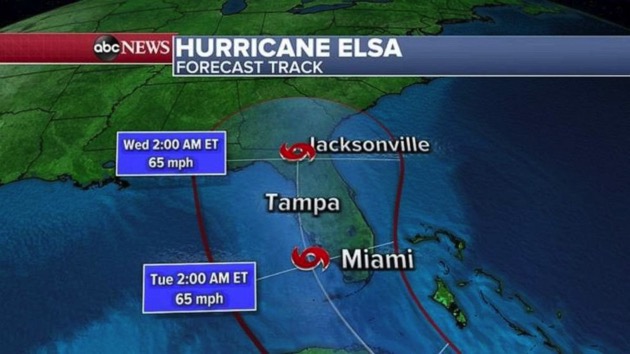 (NEW YORK) — Hurricane Elsa, the first of the Atlantic season, could take many paths when it reaches the United States, from the East Coast to the Gulf Coast to Florida — including Surfside, where rescue operations are ongoing.

Elsa is over St. Lucia Friday morning after blowing through Barbados, where it brought wind gusts of 86 mph.

A hurricane warning has been issued for Haiti, where heavy rain, flash flooding and rough winds are expected when Elsa charges in Saturday afternoon, likely as a Category 1 hurricane.

By Sunday night into Monday, Elsa will pass over Cuba as a tropical storm with heavy rain, flash flooding and 65 mph winds.

On Monday, Elsa will reemerge in the Gulf of Mexico as a tropical storm with winds of about 65 mph.

By Monday evening, Elsa will approach the Florida Keys as a strong tropical storm with winds near 65 mph.

The National Hurricane Center forecasts Elsa will move up the west coast of Florida, from Key West to Tampa, Monday night through Tuesday night.

As of Friday at least 18 people, including two children, have been confirmed dead and 145 others remain unaccounted for.

The first rain bands in South Florida, including Miami, are expected Monday morning.

But Florida may be spared from a major hit. With several days still to go, Elsa could take other paths, either hitting New Orleans and the Gulf Coast states or staying east of Florida and impacting the Carolinas.