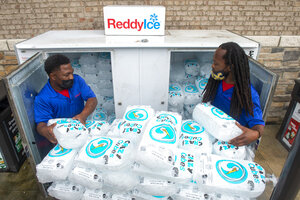 NEW ORLEANS (AP) — Ida’s center made landfall on Cuba’s Isle of Youth Friday as a rapidly intensifying storm that could speed across warm Gulf waters and slam into Louisiana as a Category 3 hurricane on Sunday, the National Hurricane Center warned.

The National Hurricane Center says Ida has become a hurricane and made landfall in Cuba, with top winds of 75 mph.

“The forecast track has it headed straight towards New Orleans. Not good,” said Jim Kossin, a senior scientist with The Climate Service.

New Orleans Mayor LaToya Cantrell called Friday for the evacuation of everyone living outside the levee system that protects the area from flooding. She did not say how many people lived there, but urged residents with medical conditions and other special needs to get out early.

“Now is the time,” Cantrell said.

Ida was expected to become a hurricane Friday before hitting tobacco-rich western Cuba, where the government issued a hurricane warning Friday for its westernmost provinces and the Isle of Youth. As much as 20 inches of rain could fall in places, making deadly flash floods and mudslides possible, forecasters said.

An even greater danger will then begin over the Gulf, where forecasts were aligned in predicting Ida will strengthen very quickly into a major hurricane, reaching 120 mph (193 kph) before landfall in the Mississippi River delta late Sunday, the hurricane center said.

If that forecast holds true, Ida would hit 16 years to the day since Hurricane Katrina landed as a Category 3 storm with 125 mph (201 kph) winds near the riverside community of Buras in Plaquemines Parish, just down the Mississippi from New Orleans. Buras and New Orleans are among the places that show the highest probabilities for getting hit with hurricane-force winds from Ida, the national hurricane center said.

People were getting ready in New Orleans on Friday, lining up for groceries, gas and ice, and the city was offering sandbags.

Traffic snarled at entrances to a New Orleans Costco, where dozens of cars were backed up at the gas pumps and shoppers wheeled out carts stacked with cases of bottled water and other essentials.

Retired police officer Wondell Smith, who worked on the police force 16 years ago when Katrina hit, said he and his family were planning to stay, but were also getting ready to head farther inland if the forecasts worsened. He loaded water, bread and sandwich meat into his SUV.

“I know what that looks like,” Smith said, referring to the potential devastation. “This is my first time being home in 34 years of service,” he added. “And I want to be prepared.”

Kickoff for Saturday’s preseason game between the Arizona Cardinals and the Saints at the Superdome was moved up seven hours to avoid the weather, to a noon Central Time start after consultation with city and federal officials and the National Weather Service.

“Ida certainly has the potential to be very bad,” said Brian McNoldy, a hurricane researcher at the University of Miami. “It will be moving quickly, so the trek across the Gulf from Cuba to Louisiana will only take 1.5 days.”

A hurricane watch for New Orleans and an emergency declaration for the state of Louisiana were declared. Category 3 hurricanes are capable of causing devastating damage.

“Unfortunately, all of Louisiana’s coastline is currently in the forecast cone for Tropical Storm Ida, which is strengthening and could come ashore in Louisiana as a major hurricane as Gulf conditions are conducive for rapid intensification,” said Gov. John Bel Edwards.

“By Saturday evening, everyone should be in the location where they intend to ride out the storm,” the governor added.

A hurricane watch was in effect from Cameron, Louisiana, to the Mississippi-Alabama border — including Lake Pontchartrain, Lake Maurepas and metropolitan New Orleans.

Dangerous storm surge was also possible along the Gulf Coast. If it pushes a storm surge at high tide, Ida could overlap some levees, with 7 to 11 feet (2.1 to 3.4 meters) of water predicted from Morgan City, Louisiana, to Ocean Springs, Mississippi.

“There is an increasing risk of life-threatening storm surge, damaging hurricane-force winds, and heavy rainfall Sunday and Monday, especially along the coast of Louisiana,” the hurricane center said.

The mayor of Grand Isle, a Louisiana town on a narrow barrier island in the Gulf, said a voluntary evacuation late Thursday would become mandatory on Friday.

By the time it reaches the central Gulf Coast Sunday, it could dump 8 to 16 inches (15 to 30 centimeters) of rain, with 20 inches in isolated areas, from southeast Louisiana to coastal Mississippi and Alabama through Monday morning. More heavy rains are likely across Mississippi when Ida moves inland, causing “considerable flash, urban, small stream, and riverine flooding,” the hurricane center said.