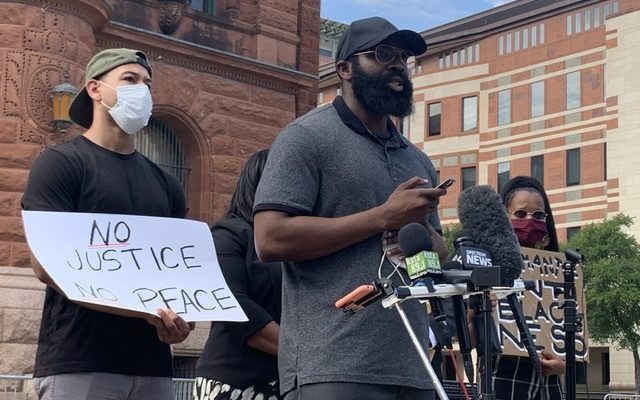 SAN ANTONIO (KTSA News) – A day after felony charges against him were dropped, a man mistakenly detained by police said he was “guilty before being proven innocent.”

Mathias Ometu says his “life changed forever” August 25 when he went for a jog, listening to his favorite music and was suddenly stopped by police who were looking for a suspect accused of hitting and choking a woman. Officers say Ometu matched the description given by the victim who also told them her ex-husband was wearing a green shirt and shorts.

The Nigerian-born U.S. citizen says he was within his rights when he refused to identify himself to police because he wasn’t under arrest and he had done nothing wrong.

His civil rights attorney, Artessia “Tess” House, said even if Ometu had identified himself, officers probably wouldn’t have believed him because he didn’t have any ID with him.

“I find it funny that Chief McManus says if he just gave his name that it would be over in two minutes,” said House. He didn’t have his ID, and the officers still would have tried to detain him.”

Ometu was handcuffed and officers told him they were taking him to the victim’s location so that she could identify him.

“They said ‘stay calm,’ but there’s nothing calm about putting an innocent man in the back of a police car,” said Ometu. “I was guilty until proven innocent.”

San Antonio Police Chief William McManus has released body cam footage which shows Ometu being forced into the back of a police car.  He was arrested and charged with two counts of felony assault of a peace officer for allegedly kicking two officers.

Ometu spent two days in jail, which he described as a humiliating experience

“I was stripped naked. I was exposed and I felt violated,”Ometu said, choking up as he struggled to get the words.

The 33-year-old USAA insurance adjuster said he worried about what his employer, his family and friends would think, and he wants his name cleared.

There has been no mention of legal action, but House said they’re weighing all of their options.