Ida’s path of destruction: New Orleans may be without power for days 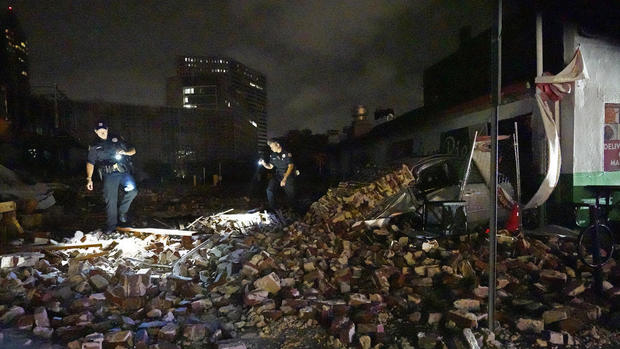 The wrath of Ida, one of the strongest storms to ever hit the U.S. mainland, was on full display across Louisiana on Sunday as the Category 4 hurricane struck the state. At least one death has been reported.

Correspondent Omar Villafranca said Monday that eight major transmission lines and a tower were destroyed, which means New Orleans may be without power for days – maybe even longer.

Dashcam video captured the dangerous conditions Sunday in Houma, southeast of New Orleans: wind lifted the roof off a building and sent it flying down a street, ripping down power lines.

Massive roof launched with wind gust and hit this power pole in front of Dominator Fore and I can’t even put into words how much worse tbis is going to get in Houma with inner eye wall of Hurricane Ida approaching rapidly @RadarOmega @accuweather pic.twitter.com/DBzFfuCdvh

Powerful gusts tore the top off of a medical clinic, and damaged the roof of a hospital near New Orleans. A hundred-year-old building that had survived Hurricane Katrina was turned into a pile of bricks, collapsing onto a parked car.

Ida’s winds ripped through the French Quarter with some gusts over 100 mph. The winds brought down an awning in the French Quarter, and later, knocked out power to the entire city, plunging more than a million customers across the state into darkness.

Earlier in the day, Mayor Latoya Cantrell had warned residents to prepare for the worst. “This is very serious,” she said. “We need you to stay in from this point forward – all morning, all afternoon, all evening.”

The storm made landfall around midday, slamming into Port Fourchon, with gusts up to 172 miles per hour, and flooding homes along Grand Isle, where 40 residents ignored a mandatory evacuation order.

Security camera footage at a firehouse in Delacroix showed how fast the waters came. One hour later, storm surge had swallowed the road.

As Ida charged inland, 110-mph winds tore down trees and powerlines, and toppled buildings, including a Shell station.

While those caught in Ida’s path called for help, help couldn’t make it out into the storm.

When a Jefferson Parish dispatcher requested a rescue unit for a condo whose wall had blown out, a responder replied, “Not responding to calls like that. It’s too dangerous to put our guys out in harm’s way.”

While the wind and surge devastated much of the state, New Orleans appears to have avoided the kind of catastrophic flooding caused by Hurricane Katrina 16 years ago.

Ida was the first major test of the city’s $14.5 billion upgrades to its levee system, and those levees appear to have held for the most part, despite a report that one levee has failed.