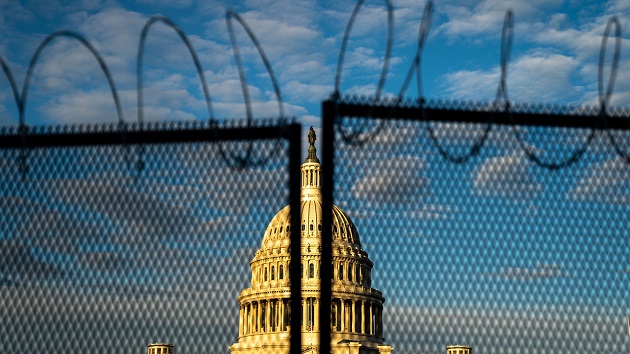 WASHINGTON, DC - JANUARY 16: Barbed wire, is seen atop security fencing, with the dome of the U.S. Capitol Building on Saturday, Jan. 16, 2021 in Washington, DC. After last week's riots and security breach at the U.S. Capitol Building, the FBI has warned of additional threats in the nation's capital and across all 50 states. (Kent Nishimura / Los Angeles Times via Getty Images)

(WASHINGTON) — A grandmother from Indiana who participated in the Jan. 6 insurrection at the U.S. Capitol was sentenced Wednesday to three years of probation for her participation in the riot, making her the first person sentenced in the attack.

Anna Morgan-Lloyd, a 49-year-old hair salon owner, pleaded guilty to one misdemeanor count of parading, demonstrating, or picketing in a capitol building, which carries a maximum sentence of six months in jail and a $5,000 fine. Washington, D.C., District Judge Royce Lamberth also ordered her to complete 40 hours of community service and pay $500 in restitution.

The sentence is what the defense had asked for, and the government supported.

Morgan-Lloyd, who prosecutors said did not participate in any of the violence at the Capitol, posted on Facebook after the attack that it was the “best … day ever,” adding a curse word to the description.

Prior to sentencing, prosecutors said they found the sentence “appropriate,” despite what they called Morgan-Lloyd’s initial “ill-considered and misguided commentary,” in part because there was no evidence that she preplanned her attack or incited others, and because she worked with investigators, admitted to her actions, and expressed contrition.

Before receiving her sentence, Morgan-Lloyd tearfully apologized to the court for participating in what she called a “disgraceful” day.

“I went there to show support for President Trump peacefully, and I’m ashamed that it became a savage display of violence that day,” Morgan-Lloyd said.

She did not face any major charges for her role.

The sentencing marks a milestone in the Jan. 6 investigation, which enters a new phase after its first seven months. Dozens of accused rioters are in early plea discussions, according to prosecutors, with nearly a dozen rioters having pleaded guilty to charges so far.

To date, roughly 500 individuals have been arrested for participating in the riot in what has become one of the largest investigations ever undertaken by the Department of Justice.

Morgan-Lloyd first came to the attention of authorities in January when she applied for a gun permit just weeks after the riot, and an employee at the local sheriff’s office recognized her while processing the application. A client at her hair salon told FBI investigators that she “regularly spoke supportively of QAnon and other conspiracy theories,” according to court documents.

A friend who accompanied Lloyd to the Capitol later posted multiple photos on Facebook, with one caption reading, “Inside Capitol Building.”

“Best … day ever!! I’ll never forget. We got into the Capitol Building,” Morgan-Lloyd responded in the comments accompanying the photo, according to prosecutors.

In a letter written to the judge in support of probation, Morgan-Lloyd said she “felt ashamed” that the riot had turned violent and apologized for the chaos that day. Morgan-Lloyd said that she is a registered Democrat who “found [herself] supporting Trump” in the 2016 election, which she “found hard to believe because we didn’t like him at all before.”

“But he was standing up for what we believe in. We couldn’t argue with it,” Morgan-Lloyd said in the letter.

“Probation comes once in a lifetime,” Judge Lamberth told Morgan-Lloyd Wednesday in court. “This is your once.”