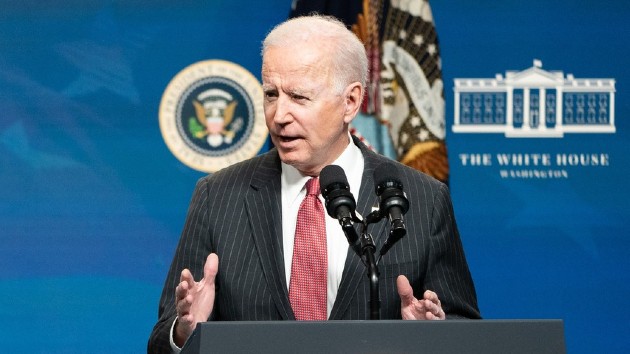 (WASHINGTON) — President Joe Biden said he will direct states, tribes and territories to make all American adults eligible for a COVID-19 vaccine by May 1, in his first prime-time address Thursday.

The president also communicated that if everyone does their part to slow the spread and get vaccinated, there is a chance that families, friends and neighbors could gather in small groups by the Fourth of July.

“After this long hard year, that will make this Independence Day something truly special where we not only mark our Independence as a nation but begin to mark our independence from this virus,” he said.

For the third time this year, the president highlighted a landmark moment in the COVID-19 pandemic, delivering his address to recognize the sacrifices Americans have made in the year since widespread shutdowns began across the United States and to ask them to help with “what comes next.”

“While it was different for everyone, we all lost something — a collective suffering, a collective sacrifice, a year filled with the loss of life and the loss of living for all of us,” he said. “But in the loss, we saw how much there was to gain in appreciation, respect and gratitude. Finding light in the darkness is a very American thing to do.”

While his announcement will not mean everyone will be able to get a shot by May 1, Biden wants everyone to be able to sign up for their first shot by then, according to the official. Also by May 1, Biden said that there will be a federally supported website that will show locations with available vaccines.

Biden also announced the deployment of more than 4,000 active duty troops to support vaccination efforts, bringing the total number of troops deployed to over 6,000. The administration on Friday will also expand the pool of who is allowed to administer the COVID-19 shots to include dentists, paramedics, physician assistants, veterinarians and medical and health care students.

On March 11, 2020, the World Health Organization declared the spread of the virus a pandemic and hours later, then-President Donald Trump delivered an address from the Oval Office and suspended travel from Europe.

In the year since, with Americans quarantining at home and many governors shutting down their state economies, U.S. unemployment skyrocketed to 14.8% and more than 22 million American jobs were lost at the height of the pandemic, creating one of the largest economic crises in U.S. history.

On the eve of his inauguration, Biden held a solemn ceremony at the Lincoln Memorial, surrounded by 400 lights around the Reflecting Pool, to honor the more than 400,000 Americans who had died from the coronavirus. It was the first time the nation had ever memorialized the lives lost.

When Biden delivered his nearly 20-minute speech to the nation Thursday night, the death toll had reached 527,726, he said, reading from the back of his schedule that he keeps in his jacket pocket. The death toll is the highest in the world and it comes one year to the day after President Donald Trump spoke from the Oval Office saying he would use the “full power of government” to fight the virus, after saying the day before “it will go away.”

Biden touted the benefits of his recently passed $1.9 trillion American Rescue Plan (ARP), which he signed into law earlier Thursday afternoon. The plan aims to provide economic relief to families and businesses that continue to feel the lasting impacts of this pandemic.

Not a single Republican voted for the bill, a disappointment for Biden who had hoped to start off his presidency with a bipartisan win on the legislation, at one point he even confidently said “we’ll get Republican support.”

Biden did have to make concessions along the way to appease moderate Democrats like Sens. Joe Manchin and Kyrsten Sinema.

Fewer Americans will be eligible for those stimulus checks, enhanced weekly unemployment benefits were reduced from Biden’s proposed $400 to $300 and there is no mandate for a $15 an hour federal minimum wage.

Despite the lack of GOP support, the Biden administration has been touting the popularity of the bill among Americans. A Pew Research poll found that 70% of U.S. adults say they favor the legislation and 41% of Republicans/Lean Republican say they are in favor of the package.

During her daily press briefing on Tuesday, White House press secretary Jen Psaki gave a clearer picture of what a family would get because of the ARP.

“Here’s what this all means for a typical family of four with parents making under $150,000 a year combined and with kids in school age eight and five: Because of the president’s rescue plan, that family of four will soon be getting $5,600 in direct payments, and because of the expanded child tax credit, they’ll get $2,600 in addition to that. So that’s $8,200 more in the pockets of this family as they try to weather this storm.”

With the bill passed, Psaki also said they’re looking ahead to getting Biden, Harris and their “best voices” on the road to sell this to the public — but details on where they’ll be traveling to were not immediately announced.

“We’ll be emphasizing a number of components that are in the package and really having a conversation. This is important to the president personally. Having a conversation directly with people about how they could benefit, addressing questions they have, even taking their feedback on implementation and how to make it clear.”

Another groundbreaking achievement over the year was the creation and approval of three safe and effective COVID-19 vaccines and as he’s been doing, Biden will likely urge Americans to get vaccinated to help bring the country closer to ending the pandemic.

Nearly 24% of Americans over 18-years-old have already received at least one dose of a COVID-19 vaccine, according to the Centers for Disease Control and Prevention.

Over 29 million COVID-19 cases have been diagnosed in the U.S., but the national seven-day average of daily cases has now dropped to under 60,000 cases a day on average, a 12.5% drop in the last seven days.

The decline and stabilization has led the CDC to release new guidelines saying fully vaccinated Americans can start to gather with vaccinated grandparents or friends without wearing masks or staying 6 feet apart, but haven’t advised when it will be safe for them to travel again.

“There are a lot of folks who are older, people with chronic diseases,” Dr. Ashish Jha, dean of the Brown University School of Public Health, said on ABC’s “Good Morning America” this week. “Let them get vaccinated and I think it will happen in the next month or so then we can begin to relax these restrictions and get our lives back.”