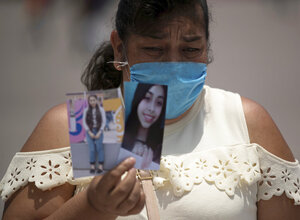 FILE - In this Aug. 5, 2020 file photo, Maria Alberto holds up photos of her missing daughter Montserrat Murrieta, during a protest to call attention to the country's thousands of disappeared, at Mexico City's main square the Zocalo. (AP Photo/Fernando Llano, File)

Some of the statistics included in the president’s state of the nation report Tuesday illustrate why the president’s programs are likely to take a long time to make a dent in long-established illicit activities.

The day after his speech, López Obrador was more cautious in speaking of his achievements against crime. He said Wednesday that his administration had stopped the growth of many crimes, but not murders and extortion.

“Why has it been hard to reduce the number of murders?” he said. “Because it has to do with organized crime and there are constantly confrontations between groups.”

López Obrador promised to bring peace to the country; but in the first seven months of 2020, there have been 21,060 homicides in Mexico, slightly above the 20,713 in the same period of 2019.

A total of about 15,800 people disappeared between Sept. 1, 2019 and June 30, the difference between those reported missing and those found alive in that period. Chillingly, authorities found 1,143 clandestine burial pits and exhumed 1,682 bodies from them during that period; only 712 have been identified and only 431 sets of remains were turned over to families.

Despite declaring victory in the fight against fuel theft from government pipelines in 2019, authorities found about 2.6 million gallons (10 million liters) of stolen or illicit fuel being transported on highways between Sept. 1, 2019 and June 30. The army alone found 3,780 illegal pipeline taps in that period.

While Mexican farmers appeared to be turning away from opium poppy production as traffickers increasingly turn to the synthetic opioid fentanyl, poppy eradication seems to be going up; the army reported destroying about 24,000 acres (9,783 hectares) of opium poppies in the first seven months of 2020. That is 83% as much as the nearly 30,000 acres (12,140 hectares) they destroyed in all of 2019.

Between Sept. 1, 2019 and June 30, the army seized over ten metric tons of meth, over 6.5 tons of cocaine and almost a million fentanyl pills.

The president, who took office on Dec. 1, 2018, has pledged to end violence against journalists and human rights workers. But at the end of June, there were 1,258 people in a government protection program (396 journalists and 862 rights activists), 57.6% more than were in the program when López Obrador took office.

The one area where López Obrador has enjoyed genuine successes is tax evasion; there is a long list of Mexican and multinational companies that have ponied up millions of dollars in back taxes after reviews by tax collectors this year.

The government said that in the first half of 2020, reviews by tax collectors managed to claw back the equivalent of about $10 billion in owed taxes, “the highest amount collected in this period in history.”

But the government acknowledged that, because of the economic effects of the coronavirus pandemic, the total amount of taxes collected in the first half rose by only a meager 0.1%, despite the tough audits.

Perhaps the government’s biggest effort this year has been treating coronavirus patients. The country started the pandemic with 3,983 ventilators, and now has 10,805. It has added thousands of hospital beds and hired thousands more medical personnel.