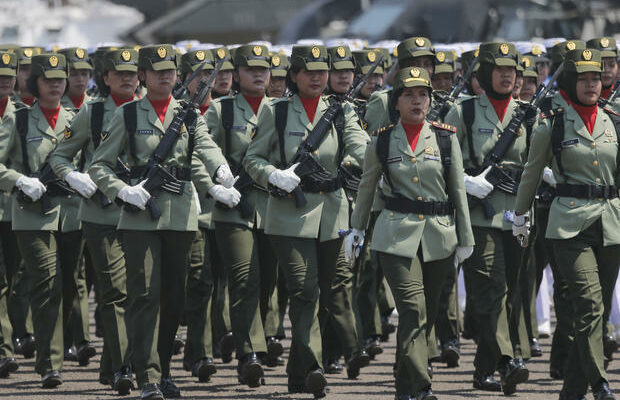 The Indonesian Army will no longer conduct “virginity tests” on female cadets, the army’s chief of staff said Wednesday. The test, which the World Health Organization determined has “no scientific merit or clinical indication,” involves someone placing their fingers into a cadet’s vagina to supposedly assess whether they have had sex.

But in an interview with reporters on Wednesday, the Indonesian Army’s Chief of Staff Andika Perkasa said that the army needs to “continuously improve every year,” including in regards to its recruitment process.

“Previously we looked at the abdomen, genitalia in detail with the examinations of the pelvis, vagina and cervix,” Perkasa said. “Now, we have done away with these examinations, especially with regards to the hymen, whether it has been ruptured and the extent of the rupture.”

The chief said that the military is placing more emphasis on testing for color blindness, spinal issues and the heart.

“The purpose of the examinations now is more focused on ensuring that the recruit will be able to lead a healthy life and will not encounter any medical issues leading to the loss of life,” Perkasa said.

Indan Gilang, an Indonesian Air Force spokesperson, told Reuters that the military issues female reproduction tests to check for issues that could impact the ability of the women to serve. Gilang said that “virginity tests” are not a part of the force’s terminology.

Human Rights Watch has said that doctors spoke to the organization about the practice, as have “dozens of women” who were forced into taking the exam when they married into military families.

Over several months in 2014, the organization investigated the regulated practice in the country’s police force. Human Rights Watch spoke with eight policewomen and applications, as well as police doctors and several others. The “virginity” test was not an official part of the obstetrics and gynecology exam required for female police cadets to undergo, but two senior policewomen told the organization it was a long-standing practice that was part of the physical exam.

“Entering the virginity test examination room was really upsetting,” one woman told Human Rights Watch about the exam she endured in 2008. “I feared that after they performed the test I would not be a virgin anymore. It really hurt. My friend even fainted because…it really hurt, really hurt.”

Human Rights Watch released the results of a military investigation in 2015. Of the 11 women the organization spoke to, all of them, including cadets, significant others of military members and a doctor, described the required exam as painful and traumatic.

“In 2013, I applied to join the military academy in Bandung. All of the recruits needed to undertake medical examinations. One of them is the ‘virginity test,'” one female military academy applicant told Human Rights Watch. “What shocked me was finding out that the doctor who was to perform the test was a man. I had mixed feelings. I felt humiliated. It was very tense. It’s all mixed up…It’s against the rights of every woman.”

The World Health Organization released a statement about the harms of “virginity testing” in 2018, saying that the exam is not supported by scientific evidence.

“The appearance of a hymen is not a reliable indication of intercourse and there is no known examination that can prove a history of vaginal intercourse,” WHO said. “Furthermore, the practice is a violation of the victim’s human rights and is associated with both immediate and long-term consequences that are detrimental to her physical, psychological and social well-being.”

The effects of undergoing the testing, particularly the two-finger testing, can be long-lasting, according to WHO. Along with the exam itself being “painful and traumatic,” it can damage genitalia and lead to bleeding and infection.

Indonesia is one of several countries, including Afghanistan, Brazil, South Africa and Northern Ireland, where it is a “long-standing practice,” according to the organization.