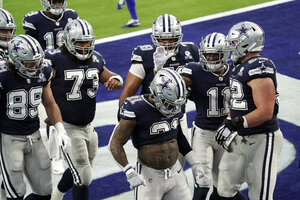 Dallas Cowboys running back Ezekiel Elliott (21) celebrates after scoring a touchdown against the Los Angeles Rams during the first half of an NFL football game Sunday, Sept. 13, 2020, in Inglewood, Calif. (AP Photo/Jae C. Hong )

ARLINGTON, Texas (AP) — Zack Martin has spent plenty of time in practice through the years at positions other than right guard, where he’s been a starter since the Dallas Cowboys drafted him in the first round in 2014.

The closest the four-time All-Pro has come to thinking he might actually switch in the middle of a game came last week, when Martin ended up moving to tackle for the first time since his Notre Dame days in the second half against Seattle.

The surprising retirement of center Travis Frederick in the offseason, followed by injuries to the top three tackles, have the Dallas offensive line in flux as much as Martin has seen from the once-steady group in his seven seasons.

“It’s not going to be the 22 guys starting at the beginning of the year that are going to take every snap,” said Martin, the anchor of a line that for years was considered among the league’s best. “I think these coaches do a great job of emphasizing that, and I think guys are preparing the right way.”

The Cowboys could get closer to their projected starting five up front Sunday at home against Cleveland. Coach Mike McCarthy said seven-time Pro Bowl left tackle Tyron Smith is on track to return after missing two games with a neck issue.

Martin said the plan is for him to return to right guard, so if Smith is back, the Cowboys have two choices at right tackle in a pair of young undrafted players with five starts between them this season: Brandon Knight and Terence Steele.

Steele, who has started all three games as a rookie, didn’t play in the second half of a 38-31 loss to the Seahawks because he had the flu. Executive vice president of personnel Stephen Jones said Steele’s illness wasn’t related to COVID-19.

The rookie’s departure prompted the shuffling. Along with Martin’s move to right tackle, center Joe Looney slid over to right guard. Rookie Tyler Biadasz filled in for Looney. Third-year man Connor Williams is the left guard.

La’el Collins, the projected starter at right tackle, has been out since the start of training camp with a hip issue. The Cowboys don’t sound optimistic about him returning soon. Backup tackle Cameron Erving injured a knee in the opener against the Los Angeles Rams.

“It’s just a lot of moving parts,” McCarthy said. “Multiple players playing multiple positions. You do get in challenges like we’re in, and I think our guys have handled it very well.”

And while there were times early in a 40-39 win over Atlanta two weeks ago that the Cowboys appeared intent on getting the ball out of Prescott’s hands quickly, he had the first of two straight games with at least 450 yards passing.

Prescott has been sacked six times, about the middle of the pack, and the Cowboys have the No. 1 offense in the NFL.

“I know those guys are fighting,” Prescott said. “As I’ve said before and I will continue to say, I work hand in hand with the offensive line. I got to get the ball out of my hands faster, frustrate the guys that are rushing, trust and believe they’re going to do their job.”

Elliott says he can’t get too caught up in who’s in or out in front of him, and isn’t sure the shuffling against the Seahawks made a huge difference. Seattle’s commitment to slowing the 2016 All-Pro might be the best explanation for his 2.4-yard average (14 carries, 34 yards).

“Those guys did a great job, have been doing a great job since we started,” said Elliott, who is ninth in the NFL with 219 yards rushing. “We’ve been doing a lot of just throwing those guys in a different spot because you never know who is going to have to play what position.”

Tell Martin about it.