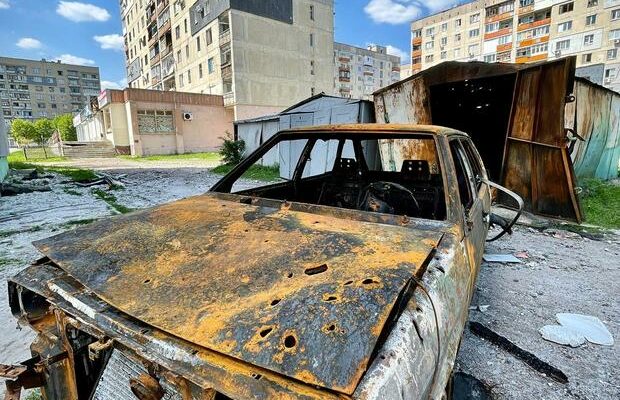 What's left of a car sits on a roadside in the eastern Ukrainian town of Lysychansk, just several mile from Russia's invading forces. CBS News

Lysychansk, Ukraine — Lysychansk is a ghost town. Just several miles from Russia’s invading forces, the mining community in eastern Ukraine‘s industrial heartland once had a population of 100,000. A tiny fraction of those residents remain, with those who can’t or won’t escape eking out an existence amid ruins.

The Russian bombardment here has been relentless. A steady jackhammer of mortars, artillery and airstrikes chipping away at the crescent-shaped front line of Ukraine’s resistance in the Donbas region.

One main road leads into the city. Piles of dirt and rock, heaped at intervals to slow Russian armor, force vehicles to zigzag across the lanes. Mangled cars with shrapnel-peppered windscreens litter the side of the road.

Our Ukrainian special forces escort led the way as we approached the town, stopping at checkpoints to smooth the passage of our convoy. We’d been promised a tour of the most heavily damaged places, and it didn’t take long to find them.

Down a tree-lined road, a commercial building was turned inside out. Corrugated iron and insulation were spread across the road like confetti. Walking as if lost through the debris was Dmytro, a freelance worker, now jobless and trapped.

“There’s constant shooting,” he said. “You live in a powder keg.”

When there’s shelling, he holes-up at home.

“The walls help,” he said half-heartedly, before conceding that nowhere is really safe. “I’ve seen how big the missiles are. It’s impossible to hide from them.”

Further on, at a blasted-out intersection strewn with glass and shrapnel, sits the husk of what used to be a café. The veranda where locals would once have sat with cappuccinos, watching the world go by, was scattered with blackened fire extinguishers. Evidence perhaps of a doomed rescue attempt.

Elderly men and women worked at the edge of a water-filled crater gouged deep into the ground at the foot of the building’s now exposed foundations. A Russian jet dropped its deadly cargo here recently, hitting the entrance to the basement where people were sheltering. The doorway, once at ground level, was left suspended five feet up the wall. The door was gone.

But the crater and the fractured pipeline within it offer a consolation of sorts: Much needed water for the toilets. Residents were taking it in turns to scramble unsteadily into the pit to dunk plastic buckets.

We watched as former coalminer Vladimir, 63, emerged from the hole. His mother recently had surgery and, at 84, needs him there. So there’s no escape — and, he says, no life.

“What life?” he asked rhetorically, setting down his buckets. “We stay in basements. Somehow, we cook. We’re scared. Everything is destroyed.”

Anyone young enough to leave Lysychansk has already gone, either to the safety of cities further west or, if male and of fighting age, to wherever the military needs them.

Walking through the streets, it looked like some kind of dystopian retirement village. An elderly couple walked hand-in-hand across pavement carpeted in shattered glass. A man in a cap and sweater pushed his bike up a hill, offering a cheery “zdravstvuyte!” (hello) as he passed.

The spring morning, cloudless and warm beneath a blue sky, could almost have been described as pleasant, if it wasn’t for the artillery strikes. The fizzing arc of their trajectory was clearly audible before they slammed into a nearby hillside with muffled thuds.

Vladimir’s neighbor Ludmilla, bucket in hand, told us about the moment the missile hit her neighborhood.

“I was at home,” she said. “Everything was shaking.”

The whip-crack of an outgoing mortar suddenly ricocheted off the walls of nearby apartments as we spoke. She barely flinched.

“I kind of got used to it,” she said. “I came here for water. What can I do? You must go out for bread — and they shoot. They shoot at night, and I crawl up in bed and pray.”

But she won’t leave.

Ludmilla said she does fear the rockets and bombs, but she was resigned to her fate should the Ukrainian defenses collapse. If the Russians arrive, she said, they will kill her first anyway: Being a vocal Ukrainian patriot in an area filled with pro-Russians has always been difficult. Now it could prove deadly.

But there may yet be hope. On the outskirts of town, overlooking the site of another Russian airstrike – this one clearly off-target, hitting a wooded verge adjoining a farmer’s field — special forces commander Oleksandr told us why.

Despite the endless bombardment, he said, his forces were holding the line as U.S.-supplied heavy weapons trickle into the region.

“Their tactics are just to level everything” he said of Vladimir Putin’s forces. “They do not need people, they just need territory.”

He said the Russians can’t fight — and won’t win — face-to-face in an infantry battle, so for the moment it remains a war of attrition, conducted with heavy artillery from a distance.

“They can’t do anything except bomb everything,” he said cradling his AK-47. “They are not the second [best] army in the world, they are fake. They stand in one place. They don’t move anywhere.”

Oleksandr said Russian soldiers were neither “morally nor physically” capable of taking the fight to the Ukrainians.

With that the interview ended, and we were back in our cars and headed down the only road out of Lysychansk.