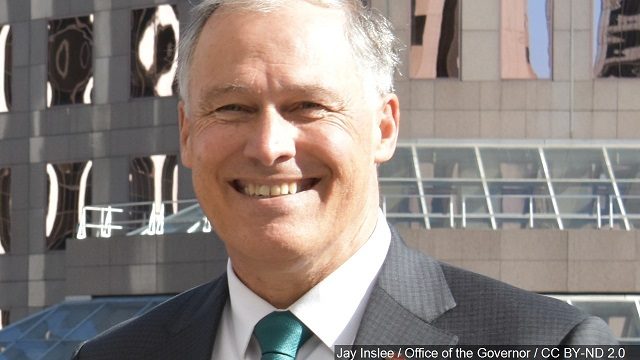 Democratic presidential candidate Jay Inslee wants his party to scrap any thoughts of impeaching President Donald Trump and instead focus on voting him out of office.

“We should have a dramatic, engaged, concerted, energetic and successful effort in November 2020 to make Donald Trump a blip in history,” Washington Gov. Jay Inslee said during a CNN town hall Wednesday.

He said damning details still could emerge about Trump’s 2016 campaign and business dealings but added that a Republican-led Senate would never remove the president.

Inslee, an underdog in the crowded 2020 Democratic field, faces pressure to raise his profile in a campaign dominated by other better-known figures such as former Texas congressman Beto O’Rourke and Vermont Sen. Bernie Sanders.

Inslee, 68, used the spotlight to emphasize his focus on combating climate change while noting his record as a liberal governor and his generally sunny approach to politics — a package that, he argued, makes him an ideal foil to the Republican president.

“I believe that I’m a perfect matchup against him because I’m a very optimistic person, and he’s a very pessimistic person,” Inslee said. “I believe in the ability of America to do big things. He thinks he wants to crawl down and just put a wall around us.”

Inslee praised his fellow Democrats for pushing the Green New Deal, but he carefully avoided an absolute endorsement of specific provisions in the resolution that envisions reordering the U.S. economy to make the nation carbon neutral in a decade. Inslee offered a timeline that would “decarbonize our entire economy in the next several decades.”

A former congressman, Inslee said in response to a question that he regrets voting for a 1994 crime bill that he now sees as exacerbating the mass incarceration of poor and nonwhite Americans, especially young black men. “If I knew then what I know now, I would not have cast that vote,” he said.

But Inslee also touted his vote in the same Congress for a ban on certain military-style weapons. He said that helped cost him his seat in a GOP-leaning central Washington district.

“I have never regretted that vote,” Inslee said, “because I do not believe that any congressman’s or politician’s seat is more important than any child’s life.”

And he noted that after initially opposing Washington state’s move to legalize marijuana, he now realizes that fears of rising crime and rampant use were overblown. He has since pardoned about 3,000 nonviolent marijuana offenders and said he wants the drug legalized nationally.

About six weeks into his campaign, Inslee acknowledged the stakes he faces as the contest shifts into the next phase. He tacitly admitted he’s yet to reach the grassroots fundraising threshold that would qualify him for the Democratic National Committee’s June and July debates — key opportunities for longshot candidates to gain attention and catch fire.

Inslee will follow his appearance with a multiday campaign swing through Iowa, New Hampshire and South Carolina, three of the first four states to cast caucus and primary ballots next winter.