International Space Station to crash into the Pacific in 2031, NASA says 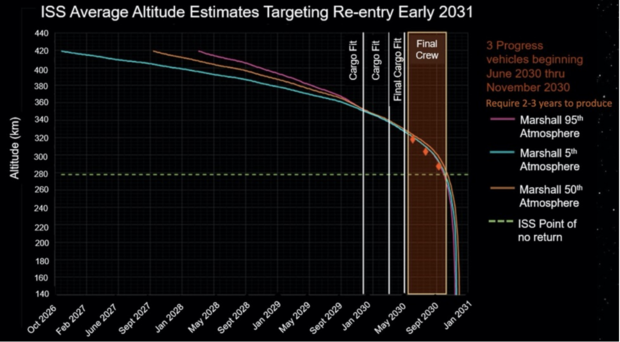 A chart showing the descending altitudes planned for the International Space Station as it approaches reentry, expected in 2031. NASA

NASA says it plans to retire the International Space Station in 2031 by crashing it into an uninhabited stretch of the Pacific Ocean. Phil McAlister, director of commercial space at NASA Headquarters, said in a press release that the private sector will be taking the lead on the development of future space station projects and that NASA will help ensure a smooth transition.

“The private sector is technically and financially capable of developing and operating commercial low-Earth orbit destinations, with NASA’s assistance,” he said. “We look forward to sharing our lessons learned and operations experience with the private sector to help them develop safe, reliable, and cost-effective destinations in space.”

NASA’s aim is to use the commercial ventures to purchase goods and services that the federal space program needs, instead of doing it all on their own. It expects several NASA crewmembers at a time to work aboard commercial space stations by the early 2030s, conducting scientific and medical research in microgravity.

NASA recently published a transition report detailing plans for the final years of the space station, which is expected to be funded for operation through 2030.

“While the ISS will not last forever, NASA expects to be able to operate it safely through 2030,” the report says.

When the program has reached the end of its lifespan, NASA intends to “de-orbit” the ISS over an uninhabited part of the South Pacific Ocean called Point Nemo. Mission control will use a series maneuvers to lower the altitude of of the station’s orbit and line it up for its descent, before it finally comes down at Point Nemo in January 2031. Thee Russian Progress spacecraft will be required to pull it out of orbit.

The station, which launched in 1998, has hosted astronauts from 19 countries in their scientific ventures. The ISS has orbited 227 nautical miles above Earth during its more than two decades in space.

In its announcement, NASA highlighted the Biden administration’s commitment to keeping the station open for the next decade, writing that the station is “busier than ever” with crews onboard “advancing the technologies and procedures that will be necessary to send the first woman and first person of color to the Moon and the first humans to Mars.”

NASA added that it would encourage and incentivize commercial companies that overtake space duties in 2031 to reach out to students and develop the next generation of space pioneers.