Investigation ordered over movie with sex scene at Acropolis 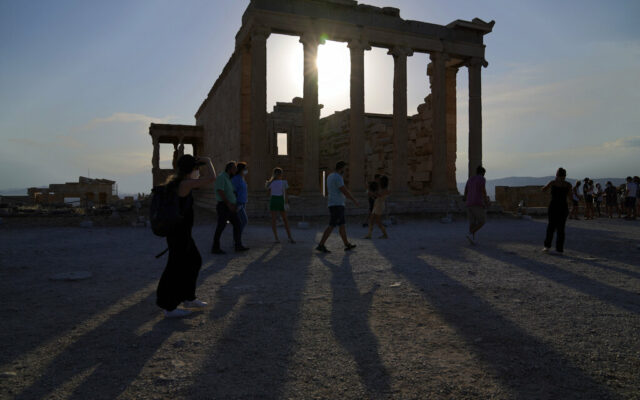 Tourist walk on the Parthenon temple during a media tour for the Foreign Correspondents organised by the Greek Cultural Ministry at the Acropolis hill in Athens, Tuesday, June 8, 2021. Following last year's COVID-19 travel restrictions, tourism-reliant Greece is hoping to see a significant uptick in tourist arrivals this summer, and has expanded its list of nationalities allowed in for non-essential travel to include 23 countries – among them the U.S., the U.K. and China – as well as members of the European Union and the Schengen passport-free travel zone. (AP Photo/Thanassis Stavrakis)

The 36-minute movie, titled “Departhenon,” was released on Dec. 21 but came to the attention of authorities this week.

The Culture Ministry said it did not give permission for the Acropolis film shoot.

“The archeological site of the Acropolis is not suitable for any kind of activism or other activity which would cause offense and displays disrespect for the monument,” the ministry said in a statement.

The movie contains several explicit scenes involving male and female actors whose faces are not shown. The scene at the Acropolis shows two men having sex while standing in a circle formed by other actors. Visitors to the ancient site can be seen walking close by.

The makers of the film, who remained anonymous, described it as “artwork that is also a political action.”

Spyros Bibilas, the president of the Greek Actors’ Association, described the movie as shameful.

“You can’t do everything in the name of activism. In fact, I don’t consider this to be activism,” he told TV network Antenna. “As a Greek, I feel ashamed.”