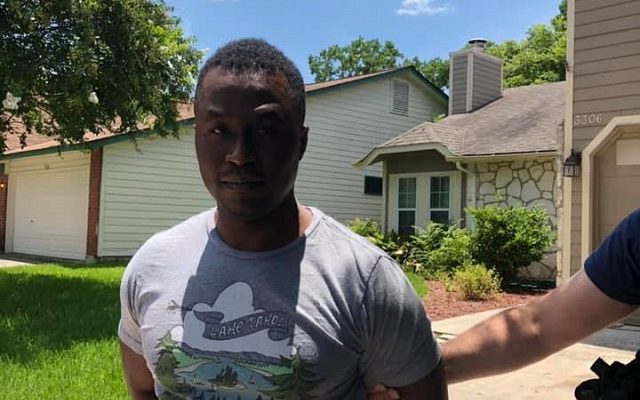 SAN ANTONIO (KTSA News)- Andre McDonald remains behind bars on a murder charge after remains found on private property last Thursday off of Specht Road were identified as those of his wife who was reported missing March 1. His bond is set at $2 million.

Bexar County Sheriff Javier Salazar says the most heartbreaking part of this story is that the 7-year-old girl, who’s autistic, saw much of what happened.

“I still strongly believe that the little girl witnessed a good part of what happened to her mom. We have evidence of that,” Salazar told KTSA’s Trey Ware. “It’s even a more horrible thing to do in front of a child who cannot express herself the way others can.”

According to the arrest warrant obtained by KTSA News, the child told friends that Andre “hurt mommy.” The warrant further states that a friend and employee of Andreen’s business, Starlight Homes, saw the child playing in the backyard.  She says the child placed rocks around a doll, broke some small sticks , placed them over the toy , poured something on the pile and asked for “the fire.”

While executing a search warrant at the McDonald’s home on Solitude Cove last March following Andreen’s disappearance, deputies said they found that Andre McDonald had recently purchased a hatchet, a shovel, gloves, heavy-duty trash bags and gasoline.  A receipt for the items was found torn in a trash can.  Investigators say the skeletal remains found last Thursday off of Specht Road  appeared to have been covered with wood and bones from a nearby deceased cow and set on fire.   There was evidence of a plastic or synthetic material that had melted among the remains.  The arrest warrant notes that the scene was similar to the child’s reenactment while playing in the backyard.

Salazar says they worked with Child Safe, which specializes in services for children who have been traumatized by abuse, neglect or sexual abuse.

“They have a set of forensic interviewers there that know how to talk to kids and know how to get information to get them to express themselves in a way that they can convey information like that,” said Salazar. “I’m just praying to God that we can get her somewhat back to a normal life after all of this.”

The affidavit says the last time Andreen was seen alive was the evening of Feb. 28 when she and her daughter went to a Pizza Hut on Thousand Oaks.  Surveillance video shows Andreen and her daughter leaving  the restaurant around 6:20 pm.  The arrest warrant states that Andre admitted fighting with his wife the night of February 28, the day before she was reported missing.

The arrest warrant also states that back in March, investigators found a claw hammer with Andreen’s blood and plant debris, as well as some heavy coveralls, in a trash can at their home.

Andre McDonald was arrested March 2 on a charge of tampering with evidence , but he was later released and placed under house arrest.  Saturday, July 13, he was arrested on a murder charge.