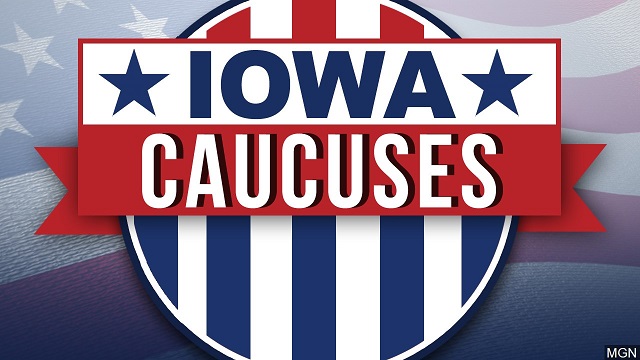 CBS News – The nominating process for the Democratic presidential race kicks off on Monday, when Iowa holds its first-in-the-nation caucuses. After a lengthy campaign cycle that started in July 2017, Democratic candidates now have their first chance to prove they can win over voters.

The modern-day Iowa caucuses date back to 1972, but it wasn’t until Jimmy Carter won in 1976 that Democrats began paying any real attention to the Hawkeye State as a key stop on the road to the White House. Since 1972, seven of the 10 candidates who have won the Democratic Iowa caucuses have gone on to be the party’s nominee.

While the winner of the Iowa Democratic caucuses has often become the party’s nominee, only two of those winners have gone on to win the presidency: Mr. Carter in 1976 and Barack Obama in 2008.

Iowa offers candidates just 41 of the 3,979 pledged national delegates available in the primary process. A candidate needs 1,991 pledged delegates to win the nomination.

While Iowa is somewhat inconsequential in the mathematics of the nominating process, its position as the very first contest can give candidates a shot of momentum that helps them in the next states to vote.

Sanders shocked the political world four years ago when he nearly upset Hillary Clinton in the Iowa caucuses. Sanders entered the 2020 cycle with a strong base of support from his 2016 run and has seen a boost in support in January that put him atop many Iowa polls. Deputy Iowa state director Bill Neidhardt says if the campaign wins Iowa, it will be directly attributable to the campaign’s strong field organizing in Iowa.

Sanders has focused on issues that matter to working-class voters in the final weeks of the Iowa campaign, including Social Security and healthcare, and he believes they can do well in working class towns. The campaign also anticipates a strong performance with young voters and Latinos, a growing demographic in Iowa. The campaign is heavily dependent on high turnout for success in Iowa, though.

“If for some reason turnout is down for whatever reason it is, I think that’s absolutely the stuff that keeps us up at night,” Neidhardt said.

Biden has presented himself as the candidate who is best suited to defeat Mr. Trump and unite the country by restoring values he says have been lost during Mr. Trump’s presidency.

A senior Biden official said the campaign is targeting unffiliated voters and Republicans who may be turned off by Mr. Trump. The senior campaign official said increasing turnout in small and rural communities is “going to potentially play to our advantage.”

Biden led most Iowa polls from the moment he entered the race until the late summer and early fall when other candidates began to overtake him. After Thanksgiving, he renewed his focus on Iowa, spending more time in the state than he had all cycle. He held more than half of his campaign stops in December and January in Iowa and held many events in rural communities and mid-sized towns.

Buttigieg tells voters he’ll bring a different set of experiences and a Midwestern upbringing to the White House. Buttigieg argues that he can win over Republicans who are frustrated with Mr. Trump and spent some of his final days in Iowa revisiting counties that swung from Obama to Trump.

Iowa communications director Ben Halle told CBS News that the campaign expects to do well in suburban communities, but also in rural towns that pivoted to Mr. Trump in 2016. Halle said success in Iowa would send voters an important message about electability. “It makes a statement to be able to do well in those places for saying ‘I am the nominee that can bring the country together’ and ‘I am the nominee that can beat Donald Trump,'” Halle added.

Buttigieg’s polling cooled a bit over the summer after he shot onto the national scene, but he has since rebounded, remaining in the top tier for several months. His team steadily built out its operation in Iowa to try to capture enthusiasm from the consistently large crowds. Halle said organizers and volunteers have embedded within communities and will be on hand Monday night from the moment caucus-goers step out of their cars.

Warren jumped out to an early lead in organizing strength in Iowa. She surprised some by building out such a large operation before the months of the caucuses. But many Iowa Democrats say that this helped propel her rise in the polls in the late summer and early fall.

Her campaign’s theory of the case has been organize, organize, organize. Even as Warren has slipped from her peak atop the polls, some Iowa Democratic leaders say her field operation could lead to a strong finish on caucus night.

Many Iowans were drawn to her for being known as the candidate with the plans – even if they didn’t like everything that she was offering. At her final events in Iowa, she has stressed that she believes that a woman is best suited to take on Trump and that she’s in the race to “fight back.”

Klobuchar has focused her attention on going everywhere in Iowa. While this strategy has been hampered by the impeachment trial in Washington, Klobuchar was still able to get out her message to every corner of the state. She has steadily climbed the polls starting in the fall and enjoyed a bump in fundraising following the November debate. A campaign official tells CBS News that January was its best online fundraising month of the cycle.

Klobuchar campaign officials believe they will have opportunities to pick off supporters from Biden, Warren, and Tom Steyer on Caucus Night where those candidates may not reach the viability threshold. Officials tell CBS News that they believe Klobuchar will do well in the north and northwestern part of the state, which are closer to her home state of Minnesota. They also think that she will do well in counties where caucus-goers will have only seen or heard from Klobuchar in person, a strategy that could pay dividends.

Andrew Yang has joked that his campaign has grown from his GMail contact list to an operation capable of raising $16.5 million in a single quarter. He made rather infrequent visits to Iowa over the summer and fall, but spent the final 17 days before the caucuses crisscrossing the state, while some of his rivals where held up in Washington for the impeachment trial in an attempt to win over people who were still finalizing their decision in the final weeks.

Yang has called Iowa a “magical place” capable of sending a message to the rest of the world that there’s real support behind his plan to give American adults $1,000 a month and his vision “rewrite the rules of the 21st century economy.”

Businessman Tom Steyer entered the race much later than his competitors and had his busiest month of campaigning in Iowa in January. On the trail, Steyer has been hammering home the message that he’s the “unconventional” politician who can take on Mr. Trump in the general election.

He reminds caucus goers that then-candidate Trump beat someone he describes as “the most prepared candidate in history,” in Hillary Clinton after steamrolling through 16 Republican challengers during the primaries. Steyer says he can take on President Trump when it comes to the economy and often reminds Iowans that as president he will make addressing climate change his “number one priority.”

While the bulk of the attention has been on the Democratic candidates, the Republican Party is also holding caucuses on Monday night. President Trump visited Des Moines on Thursday night for his first campaign rally in Iowa this year. Hundreds of people in the overflow crowd watched Mr. Trump speak on a big screen outside the venue.

He won Iowa by nearly 10 points in 2016, and in a recent New York Times poll, Mr. Trump defeated all of the top-5 Democratic candidates in general election head-to-head matchups. He is expected to easily defeat his two challengers, former Illinois Representative Joe Walsh and former Massachusetts Governor Bill Weld.

There was a final twist in the Iowa caucus campaign on Saturday night when it was announced that the highly anticipated Des Moines Register/CNN poll would not be released after someone reported an issue with the way the survey was conducted. The Register’s executive editor, Carol Hunter said in a statement that it “appears candidate’s name was omitted in at least one interview in which the respondent was asked to name their preferred candidate.”

CNN’s vice president of political coverage and political director David Chalian said the poll’s release was canceled “out of an abundance of caution.”

The final CBS News Battleground Tracker released on Sunday morning shows a tight race at the top. Biden and Sanders both had 25%, followed by Buttigieg with 21%, Warren at 16% and Klobuchar at 5%. Everyone else was polling below 5%. The survey has a margin of error of  +/- 3 points.

The caucuses start at 7:00pm central time. Iowans will gather at one of the 1,678 precincts across the state at community centers, schools, town halls, and churches. Only registered Democrats can participate in the Democratic caucuses, but people can change their party affiliation on caucus night.

In those rooms, people won’t be privately casting a vote for a candidate. Instead, they will stand in front of their friends and neighbors to publicly show which candidate they support. Rather than a straight popular vote, people in those precincts will be electing delegates that represent each candidate.

The caucus rules are among the most complex in American politics. In most precincts, candidates need at least 15% support from the room in order to win delegates. That’s known as the viability threshold.

The process begins with people going to stand with fellow supporters in the area designated for whichever candidate is their top choice. That process is known as the first alignment.  After that, supporters who back a candidate that hit the viability threshold will be locked in.

Everyone else has a few options during a process known as realignment: join a viable candidate’s group, try to win over other supporters of non-viable candidates to hit the threshold, join another candidate on the cusp of viability or go home.

When the caucuses are over, the state calculates how those delegates from all 1,678 precincts equate to delegates sent to the county, congressional district, and state conventions. The number of state convention delegates a candidate has will be reported on caucus night as “state delegate equivalents.”

On caucus night, the Iowa Democratic Party will release three sets of results: the popular vote from the first alignment, the popular vote after the realignment, and the number of state delegate equivalents a candidate wins,. The person who wins the most state delegate equivalents is technically the winner of the Iowa caucuses because that determines how many delegates a candidate wins for the national convention.

Depending on the size of the precinct, the process can take a couple of hours, but some results are expected to start coming in around 9:00 p.m. ET. The bulk of the results will likely come in a couple of hours later.

CBS News will have results on the air and CBSN will be broadcasting live from Iowa…Results also on CBSNews.com.