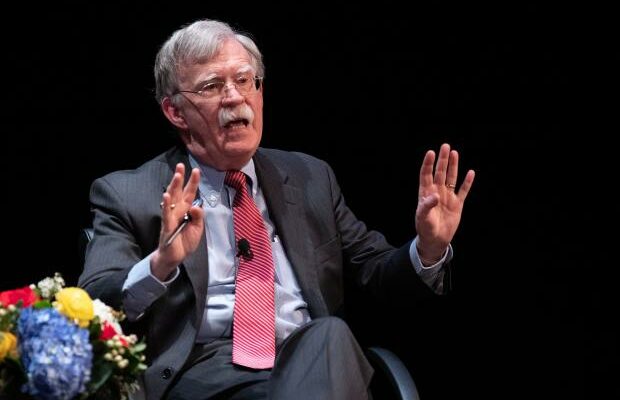 Former National Security adviser John Bolton speaks on stage during a public discussion at Duke University in Durham, North Carolina on February 17, 2020. - Bolton was invited to the school to discuss national security weeks after he was thought of as a key witness in the impeachment trial of President Donald Trump. (Photo by Logan Cyrus / AFP) (Photo by LOGAN CYRUS/AFP via Getty Images)
Washington — A member of Iran’s Islamic Revolutionary Guard Corps (IRGC) was charged with plotting the murder of former national security adviser John Bolton, the Justice Department announced Wednesday.

An indictment against Shahram Poursafi, of Tehran, alleges that beginning in October 2021, he attempted to arrange Bolton’s murder, likely in retaliation for the killing of Qassem Soleimani, the head of the IRGC’s elite Quds Force who was killed by a U.S. airstrike in Iraq in January 2020.

Working on behalf of the Quds Force, Poursafi attempted to pay $300,000 to people in the U.S. for the murder, the Justice Department said. The department said there is no evidence that Poursafi has ever been to the U.S.

Bolton, who served as national security adviser to former President Donald Trump, thanked the Justice Department for the charges against Poursafi and the FBI for “its diligence in discovering and tracking the Iranian regime’s criminal threat to American citizens; and the Secret Service for once again providing protection against Tehran’s efforts.”

“While much cannot be said publicly right now, one point is indisputable: Iran’s rulers are liars, terrorists, and enemies of the United States,” he said in a statement to CBS News. “Their radical, anti-American objectives are unchanged; their commitments are worthless; and their global threat is growing.”

“The Justice Department has the solemn duty to defend our citizens from hostile governments who seek to hurt or kill them,” he said in a statement.

Catherine Herridge contributed to this report