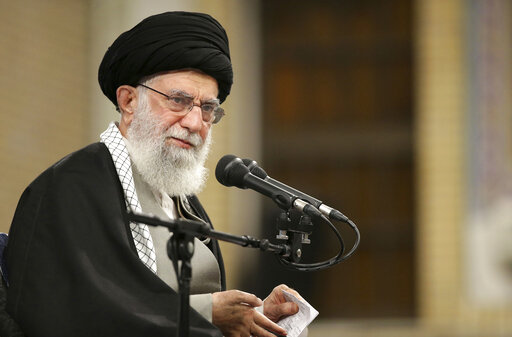 In this picture released by the official website of the office of the Iranian supreme leader, Supreme Leader Ayatollah Ali Khamenei speaks to a group of residents of the city of Qom, in Tehran, Iran, Wednesday, Jan. 8, 2020. Ayatollah Khamenei said "we slapped them (Americans) on the face last night" with a missile strike "but military action is not enough." He spoke hours after the strike at military bases in Iraq used by U.S. forces. The strike was in retaliation for the U.S. killing of Iran's top military commander in Baghdad. (Office of the Iranian Supreme Leader via AP)

TEHRAN, Iran (AP) — Iran’s currency dropped Thursday to its lowest value ever at 300,000 rial for each dollar amid severe U.S. sanctions against the country.

Iran’s currency was at 32,000 rials to the dollar at the time of Tehran’s 2015 nuclear deal with world powers.

Following President Donald Trump’s decision more than two years ago to withdraw the U.S. from the nuclear deal and reimpose crippling trade sanctions on Iran, the currency unexpectedly rallied for some time.

Iranian officials for months have warned exporters to bring their foreign earnings home from abroad or face having their export licenses revoked, and the central bank has warned it would publish the names of violators.

In June, the central bank reported that Iranian companies export more than $40 billion in non-oil products per year, and officials say some 50% of that remains abroad. Traders blame the sanctions for sparking a failure in returning export earnings.