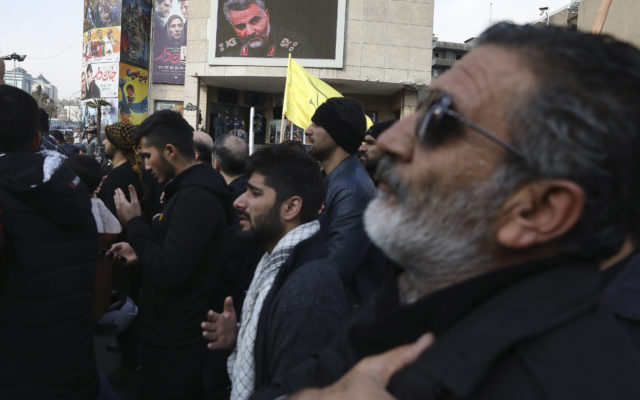 Protesters mourn in a demonstration over the U.S. airstrike in Iraq that killed Iranian Revolutionary Guard Gen. Qassem Soleimani, shown in the screen at rear, in Tehran, Iran, Jan. 3, 2020. Iran has vowed "harsh retaliation" for the U.S. airstrike near Baghdad's airport that killed Tehran's top general and the architect of its interventions across the Middle East, as tensions soared in the wake of the targeted killing. (AP Photo/Vahid Salemi)

Benjamin Netanyahu says the head of Iran’s elite Quds Force was “responsible for the death of American citizens and many other innocent people. He was planning more such attacks.”

Israel has long viewed Iran as its greatest threat and has carried out airstrikes in recent years against Iran-backed forces in Syria, Lebanon and Iraq.

Other global powers are warning that the world has just become a more dangerous place after the U.S. killed Iran’s top general.

China, Russia and France, all permanent members of the U.N. Security Council, took a dim view of the U.S. airstrike near Baghdad’s airport early Friday that killed Gen. Qassem Soleimani.

But Britain and Germany also suggested that Iran shared blame for provoking the targeted killing that dramatically ratcheted up tensions in the Mideast.

A German government spokeswoman says the U.S. strike is “a reaction to a whole series of military provocations for which Iran bears responsibility.”