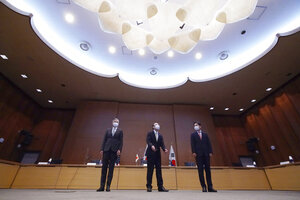 TOKYO (AP) — Senior diplomats from Japan, the United States and South Korea urged North Korea on Tuesday to return to talks over its missile and nuclear development, a day after it announced it successfully tested new long-range cruise missiles, indicating an advancement of its military capabilities.

U.S. envoy Kim said the three countries were open to diplomacy with North Korea “to make tangible progress that increases the security of the United States and our allies.” He urged North Korea to “respond positively to our multiple offers to meet without preconditions.”

Washington and its allies will continue to work to fully implement all U.N. Security Council resolutions in addressing North Korea’s missile development, he added.

All three agreed on the timeliness of their meeting Tuesday.

“Our trilateral cooperation is essential for complete denuclearization and permanent peace on the Korean Peninsula,” Noh said.

On Monday, the state-run Korean Central News Agency reported that the tests of the new missiles showed they can hit targets 930 miles away.

North Korea hailed the missiles as a “strategic weapon of great significance,” suggesting that they were developed with the intent of arming them with nuclear warheads. North Korea says it needs nuclear weapons to deter what it says is hostility from Washington and Seoul.

Chinese Foreign Minister Wang Yi was to arrive in Seoul on Tuesday for talks with South Korean officials on bilateral relations and the freeze in nuclear diplomacy with North Korea.

Wang is scheduled to meet with South Korean Foreign Minister Chung Eui-yong on Wednesday. Chung is expected seek a more active role from Beijing, North Korea’s main ally and economic lifeline, in persuading the North to return to the negotiating table.

Japanese Foreign Minister Toshimitsu Motegi said before the trilateral meeting that it was a “good occasion to reconfirm close cooperation among the three countries and discuss the latest North Korean situation.”

Japanese officials and some experts said North Korea’s weekend missile tests were a “new threat” to the region.

Japan and South Korea are both key allies of the U.S. in the Asia-Pacific region.