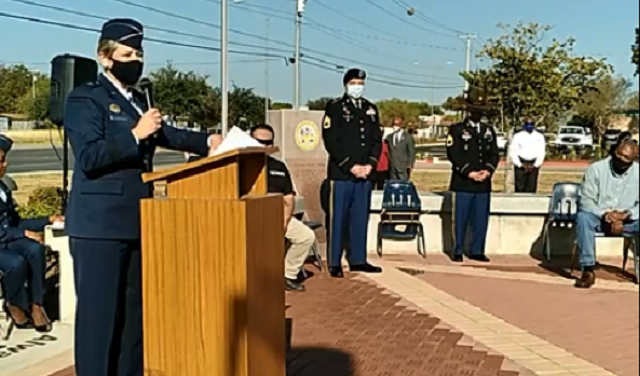 SAN ANTONIO (KTSA News) – The Commander of the 502nd Air Base Wing and Joint Base San Antonio says we can never express enough gratitude to our veterans.  Brig. Gen. Caroline Miller was the keynote speaker at a Veterans Day ceremony at Schertz Memorial Plaza.

“You are the backbone of our liberty.  We are indebted to all of you,” said Miller. “We owe you our very way of life, including the freedom to live, work and raise our families in a free nation.”

She  thanked the “patriotic community” of Schertz for paying tribute to veterans and supporting the military.

“We can never fully repay our debt and gratitude to the hundreds of thousands who have died in combat or the millions that have been injured or wounded,” said the JBSA Commander. “We can say thank you to the 18-million veterans still living today.”

She said the sacrifices that members of the Armed Forces have made enable us to gather at events such as the ceremony on Wednesday, which was organized by the Schertz-Cibolo-Selma area Chamber of Commerce.

“There is one thing our veterans have taught and continue to teach us –it’s that there is no threat we cannot meet and no challenge so great that we cannot overcome,” said Miller.

State Sen. Donna Campbell, who chairs the Senate Committee on Veterans Affairs and Border Security, told the crowd there are about 1.5 million veterans in Texas.

“There is no more honorable profession, no greater title of valor than to be called a veteran,” said Campbell.